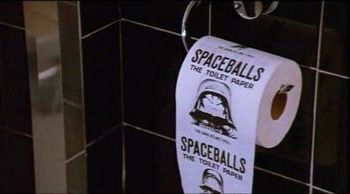 It turns out just about everybody loves owning cute little tchotchkes. Ones that are branded with some obscure, indie-cred logo, image or phrase they like is even better.

So, you start to sell stuff. T-shirts, pins, prints, CDs, and cards are the obvious choices. But mouse pads, coffee mugs, baseball caps, plushies, posters, babies' onesies, messenger bags, and refrigerator magnets all have their fans. In fact, anything that you can figure out how to stick a logo, character or catchphrase onto will do. That's "The Merch". The merchandise. The moneymaker. The stuff that pays the bills.

And if this is for girls, the Pink Product Ploy increasingly is used.

Sometimes The Merch becomes more important than the work it was intended to support.

Contrast Merchandise-Driven, which covers instances when the creators of The Merch are the same people who have creative control over the show. If The Merch debuted in the work, then it's a Defictionalization that may or may not be in response to The Red Stapler effect. When merchandising works well enough, then we learn that Crack is Cheaper.

Compare Toys. For more substantial tie-in works, see Tie-in Novel, The Film of the Book, The Anime of the Game, and Licensed Game.

Examples of The Merch include:

Retrieved from "https://allthetropes.org/w/index.php?title=The_Merch&oldid=1963522"
Categories:
Cookies help us deliver our services. By using our services, you agree to our use of cookies.