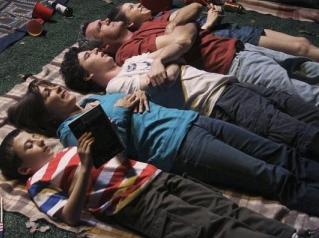 Frankie Heck (Patricia Heaton) and her husband Mike (Neil Flynn) live in the midwestern town of Orson, Indiana. Frankie is a saleswoman at "Ehlert Motors" (where she has the lowest sale record) and Mike is the manager at the local quarry. Their three children are: Axl, perpetually lazy and unmotivated, even to wear a shirt or pants; Sue, the braces-wearing middle child who tries out for a number of extracurricular activities... and fails spectacularly at them all; and Brick, the gifted, but socially awkward smallest child, who reads a lot and has a tendency to repeat the last words he said[1].

Along with Modern Family, it was the break-out comedy of the 2009 television season (love it or hate it).

Tropes used in The Middle include:
Retrieved from "https://allthetropes.org/w/index.php?title=The_Middle&oldid=1553176"
Categories: