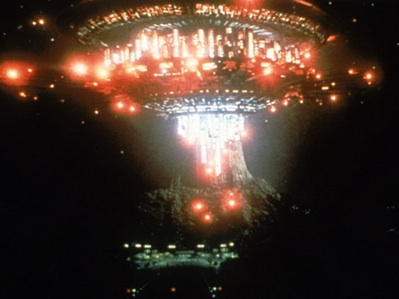 It might be shiny, or a little more gritty, or just plain cool, but however it's built, it obviously looks very important. And it's got a lot of Mooks in tow. It's the commanding flagship of a large alien army, keeping tabs over its soldiers and scouts, and thus is one of a kind in its army.

Blowing it up can render the multitudes of the once superior invaders leaderless and rid the universe of the MacGuffin kept inside it. There's no mistaking that taking it down will win an automatic victory for the good guys. But if the mothership is also a big fat battleship, the normal arsenal of weapons won't break its superior Deflector Shields (and will only prompt a response with its own Wave Motion Gun), so our heroes are probably going to have to resort to some Zany Scheme to topple it.

The fact that bringing it down might cause problems of its own is usually Handwaved.

A variant has a mothership in charge of a bunch of exploration scouts, one of which will inevitably get left on Earth and needs one Earthling's help to rendezvous with it.

See also: Standard Sci-Fi Fleet, Flying Saucer. Might overlap with The Battlestar if it doesn't already harbor dozens of Battlestars inside it. Not to be confused with the other kind of ship.

Also not to be confused with The Mothership.

Examples of The Mothership include: