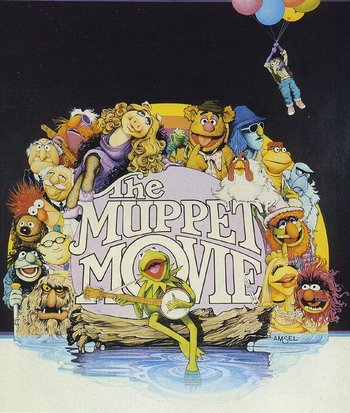 In the summer of 1979, Jim Henson brought his beloved characters from The Muppet Show to the big screen to tell their story. After a very meta Cold Opening where we see the Muppets attending a private screening of their own film, we see how Kermit was inspired to leave his home in the swamp and head to Hollywood.

Along the way, he picks up a familiar assortment of friends: Fozzie Bear, a struggling ursine comedian; The Great Gonzo, "prince of plumbing" turned would-be actor; Miss Piggy, self-proclaimed "actress/model"; Rowlf the piano-playing dog; the eccentric inventors Dr. Bunsen Honeydew and Beaker; and the psychedelic Dr. Teeth and the Electric Mayhem and their road manager Scooter. Unfortunately, Kermit also attracts the attention of Doc Hopper, an unscrupulous restaurateur who's dead set on getting Kermit as a spokes-frog for his fried frog-legs stands. Throw in some catchy musical numbers by Paul Williams and an assortment of celebrity cameos, and you've got the makings of a much-loved movie.

To date, The Muppet Movie remains the most profitable and highest grossing (accounting for inflation) live-action children's film in history.

The Muppet Movie was added to the National Film Registry in 2009.

Not to be confused with the 2011 movie The Muppets (though that one's technically a sequel of sorts).

Tropes used in The Muppet Movie include:
Retrieved from "https://allthetropes.org/w/index.php?title=The_Muppet_Movie&oldid=1881343"
Categories:
Cookies help us deliver our services. By using our services, you agree to our use of cookies.