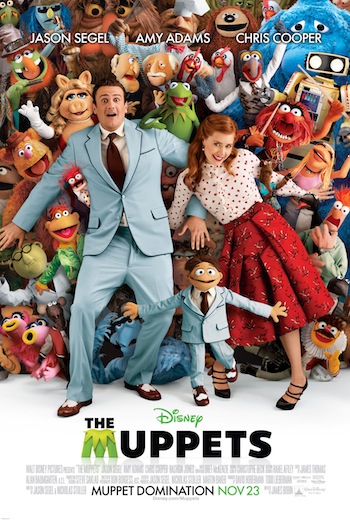 It's time to meet The Muppets!

The Muppets is a 2011 feature-length film from Disney, and the first theatrical film to feature the eponymous characters since 1999's Muppets from Space. Unlike the 1990s and 2000s films, though, this film sets out to reinvigorate interest in the Muppet brand and characters, and return them a bit to their original variety-show days. It is written by Jason Segel and Nicholas Stoller (Forgetting Sarah Marshall) and directed by James Bobin of Flight of the Conchords fame, with fellow Conchords alumnus Bret McKenzie in charge of the music. It is the first Muppet film not to feature Jerry Nelson,[1] and the first theatrical Muppet film not to feature Frank Oz. It won an Oscar for Best Song ("Man Or Muppet"), making it the first Muppet film to win any Oscar.

The plot involves Walter, the world's biggest Muppet fan, his brother Gary (Jason Segel) and Gary's girlfriend Mary (Amy Adams) from Smalltown, USA, going on a vacation to Los Angeles. There the trio discover the nefarious plan of oilman Tex Richman (Chris Cooper) to raze the Muppet Theater and drill for the oil recently discovered beneath the Muppets' former stomping grounds. To stage The Greatest Muppet Telethon Ever and raise the $10-million needed to save the theater, Walter, Mary and Gary help Kermit the Frog reunite the Muppets, who have all gone their separate ways: Fozzie now performs with a Reno casino tribute band called the Moopets, Miss Piggy is a plus-size fashion editor at Vogue Paris, Animal is in a Santa Barbara clinic for anger management, and Gonzo is a high-powered plumbing magnate. Celebrity cameos and fourth-wall-breaking ensue. ...and dancing chickens. ...and Jack Black.

After it was announced, well, let's just say the Muppet fanbase celebrated like... well, Muppets.

The first trailer can be seen here. Be aware that it deliberately misleads you into thinking it's a romantic comedy. It becomes blatantly obvious by the end. There's also the extensive Muppet Wiki page, which gives you a good idea of what you're in for.

A sequel has been announced. [dead link] Currently it is scheduled for a summer 2013 release, and Jason Segel is not involved.

Not to be confused with The Muppet Movie.

Tropes used in The Muppets (film) include:
Retrieved from "https://allthetropes.org/w/index.php?title=The_Muppets_(film)&oldid=1901668"
Categories:
Cookies help us deliver our services. By using our services, you agree to our use of cookies.