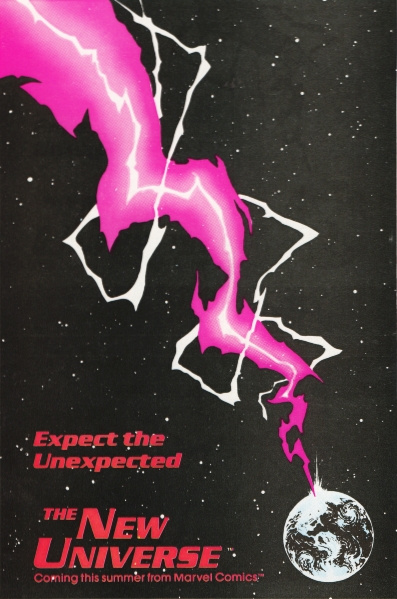 1986 was the 25th anniversary of Marvel Comics. That is, the company itself had existed since 1939, but it started calling itself Marvel in 1961; similarly, the comic that launched the Marvel Universe, Fantastic Four, had started publishing in November of that year. The Powers That Were decided that it was time for something new.

Thus, The New Universe was launched. It was a new imprint with new heroes operating in a new world. It aimed to be more realistic, with harder science and lower power levels than the regular Marvel Universe. The slogan of The New Universe was "The World Outside Your Window".

Problems set in almost immediately. Some writers apparently didn't get the memo that The New Universe was supposed to be just like the real world up until a single occurrence, "The White Event", introduced superpowers; they created comics with pre-existing magic realms, aliens, and powered armor suits as their premises. The line's budget was cut unexpectedly by Marvel Comics higher-ups. After the first year, four titles were canceled. Those in charge tried to salvage the line by having big shake-ups, such as "The Black Event", in which one of the paranormals accidentally destroys Pittsburgh, plunging America into war. Unfortunately, it was no longer "The World Outside Your Window", and readers continued to hemorrhage.

In 1989, all The New Universe titles were cancelled.

In more recent years, the whole thing has been looked on with a kind of fondness, despite its Dork Age status in the eyes of readers. In fact, Dork Age status -- in comics -- can be an artistic asset, since the talent can make drastic experimental changes to such a property and there will be few complaints.

The New Universe was revisited in the pages of Quasar and Exiles. In February and March of 2006, Marvel published several Untold Tales of The New Universe, featuring new stories set before the Black Event. In December of 2006, a new series premiered, written by Warren Ellis and titled newuniversal. While based on The New Universe, it takes place in a fresh continuity, as well as a Parallel Universe where the differences include China being the dominant power in space exploration. Most of the characters are re-imagined to focus on the original's strengths. Sadly, the series lasted only ten issues before Ellis lost most of his scripts due to hard drive failure. After Marvel moved Ellis to new projects, the series' future was hanging in limbo for several years before its' inevitable official cancellation

Jim Shooter, editor-in-chief of Marvel at the time and creator of the New Universe, went on to found another comics universe at Valiant Comics, which can be seen as having similarities to the concept.

In recent years, the TV series Heroes has done well with its similar concept of ordinary people in a realistic world gaining superpowers. Also, "The New U" concept is vaguely similar to the Wild Cards novels, which were launched at around the same time.

Titles in The New Universe include:

As noted, disappointing sales resulted in the cancellation of four titles (Kickers, Inc., Marc Hazzard: Merc, Nightmask and Code Name: Spitfire). The other titles continued, and Marvel also published some one-shots and mini-series set in the New U, post-Black Event:

The New Universe titles provide examples of:
Retrieved from "https://allthetropes.org/w/index.php?title=The_New_Universe&oldid=1966415"
Categories:
Cookies help us deliver our services. By using our services, you agree to our use of cookies.