The Nutcracker and the Mouse King

Everything About Fiction You Never Wanted to Know.
(Redirected from The Nutcracker (novel))
Jump to navigation Jump to search 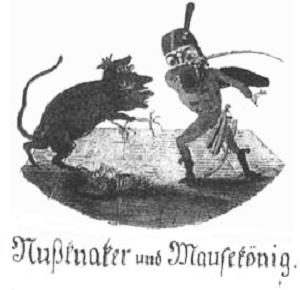 "The Nutcracker and the Mouse King" (Ger. Nußknacker und Mausekönig) is an 1816 story by ETA Hoffmann, but you probably know it by its shorter title, The Nutcracker (Rus. Щелкунчик, Shchelkunchik) from the frequently-staged ballet by Tchaikovsky, the musical suite derived therefrom, and from that suite's use in Walt Disney's Fantasia. The ballet has also been made into various animated adaptations.

The Stahlbaum children are given a toy nutcracker for Christmas from their godfather Drosselmeier. This nutcracker turns out to be more than he seems; he's really Drosselmeier's nephew transformed by a mouse queen's evil curse. With the help of young Marie Stahlbaum, the nutcracker is eventually able to overcome his foe (the queen's vengeful son), regain his true form, and take Marie to the doll kingdom. After taking a grand tour, Marie falls asleep and wakes up in her own bed. When she tries to tell her parents, they think she's dreamed the entire thing and forbid her to speak of it again. However, Marie goes to her nutcracker in the cabinet and vows she would love him if he were real, even if he were ugly. This breaks the curse, and he asks her to marry him. Marie accepts, and in a year he takes her to the doll kingdom, where she is crowned queen.

The novel was made into a ballet -- as well as, at least, two feature length Animated Adaptations.

A fan translation of Hoffmann's original fairy tale can be found here.

Tropes used in The Nutcracker and the Mouse King include:
Retrieved from "https://allthetropes.org/w/index.php?title=The_Nutcracker_and_the_Mouse_King&oldid=1697450"
Categories: