Everything About Fiction You Never Wanted to Know.
(Redirected from The Olsen Twins)
Jump to navigation Jump to search
/wiki/Mary-Kate and Ashley Olsencreator 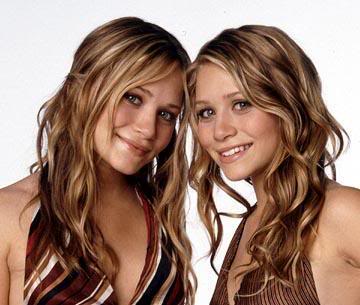 You probably remember them from Full House. Or maybe it was the straight-to-VHS mystery movies? Mary-Kate and Ashley Olsen have been the top earning stars under the age of 21 throughout the 2000s. They earned $40 million last year even though they haven't acted in anything. The girls do quite well living off their royalties, and were more famous for dating people, talking to debutantes (Paris Hilton) and having anorexia scandals (Mary Kate) in the tabloids (in 2004/2005/2006).

They were the original famous twins, and their concept stuck.

They have since asked to be called Mary Kate Olsen and Ashley Olsen since they have grown up.

Their success has been marked on Forbes Magazine's "Celebrity 100" list since 2002, and in 2007 Forbes ranked the twins as the eleventh-richest women in entertainment, with an estimated net worth of $100 million.

Now Mary Kate has taken on acting in such movies as Beastly, The Wackness and the upcoming[when?] Story Of a Girl. She's also played minor roles in the show Weeds and Samantha Who? Mary-Kate has her own line with Jane Belfry and Fred Holston the line is currently in development.

Ashley is currently focusing on their clothing lines. "The Row", "Elizabeth And James" and "Olsenboyne"

In Fall 2008 the girls wrote a book called Influence as "a tribute to designers, artists and other industry creative individuals who inspired them."

A little known fact is that they are technically Non-Identical Twins, and are fraternal. One's face is slightly rounder than the other.

They are parodied in the Web Original Very Mary Kate.

As of the middle-late 2010s, they seem to have generally faded from view, with media mentions starting to be "whatever happened to...?" as often as not.

They have a sister named Elizabeth, also an actress, who made her cinematic debut in 2012's Martha Marcy May Marlene, and has since become rather more prominent than her sisters with her appearance as the Scarlet Witch in the Marvel Cinematic Universe.