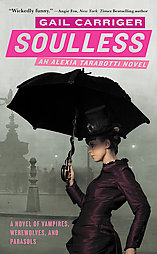 The Parasol Protectorate is a series of books by author Gail Carriger. It is primarily a Supernatural Adventure Romance, set in an alternate Victorian London with heavy steampunk elements. In the world of the Parasol Protectorate, not only are vampires, werewolves and ghosts real, but they are instrumental in British politics, fashion and scientific advancement.

The books concentrate on the adventures of Alexia Tarrabotti, a 'plain', sometimes scandalous, half-Italian 'Preternatural' who has the ability to negate supernatural abilities by touch; Lord Conall Maccon, Scottish werewolf and pack Alpha and their friends and colleagues. These adventures include custom-made weaponised parasols, rogue scientists, dirigibles and 'glassicles'.

The first book in the series was given a Manga adaptation by Yen Press.

Tropes used in The Parasol Protectorate include:

Professor Lyall: You have behaved, I would go so far as to say, badly. I suggest a well-crafted apology and an extended session of abject groveling.
Lord Maccon: I am not a groveler!
Lyall: It is possible to learn many new and interesting skills in one lifetime.
Maccon: *after consideration* Grovel, you say?
Lyall: Grovel, my lord.

She jerked back. "What are you...?"
"Only way to keep you quiet." He grumbled, taking her chin in a firmer grip and planting his mouth atop hers once more.