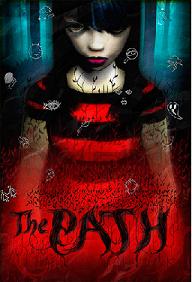 Six sisters are tasked with delivering a basket of bread and wine to their bedridden grandmother who lives in the middle of the forest at the end of a dirt path. One at a time, each girl is sent with only two instructions: go to Grandmother's house and stay on the path. Sound familiar?

In this dark retelling of the classic tale, you take control of one of the red girls as you lead them into the woods, and although advised to stay on the path, nothing prevents you from exploring the forest, collecting flowers, chasing animals and exploring abandoned locations. Though be warned, you are not the only one in the forest. This is, after all, an adaptation of the story of Little Red Riding Hood, and at any given time, you may run into the wolf...

If you wish to get the full experience out of the game, stop reading now and play it for yourself. Most of the fun is in not knowing what comes next. You can buy it here.

The Path is not really a game in the conventional sense, in that there are no enemies, no points, no levels, no bosses, and the goals are vague at best; in fact, the only thing that resembles a game in this is a grading system that grades you on how far you traveled and how many items you've collected along the way, though the creators tell you to disregard it. The Path is more of an experience, a combination of atmosphere and ambiguous storytelling to create a sense of real emotion rarely found in other things. That being said, it is certainly not for everyone. The game, though short, is slow and borders on repetitive. It is not for the impatient. And with its subtle references to violence and sex, it is definitely not for kids.

Note that some of the trope names below can be spoilers in themselves.

Tropes used in The Path include:

Retrieved from "https://allthetropes.org/w/index.php?title=The_Path&oldid=1490552"
Categories:
Cookies help us deliver our services. By using our services, you agree to our use of cookies.