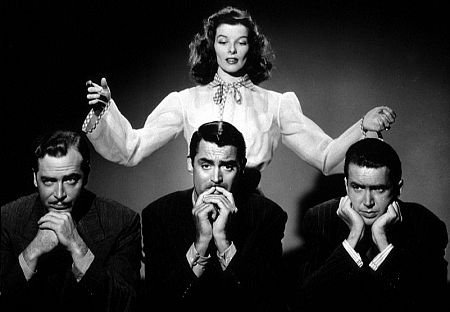 Upper class Tracy Lord (Hepburn) is getting married to an independently wealthy man, but her ex-husband (Grant) looking for a little revenge sneaks in a couple - reporter (Stewart) and photographer - for Spy Magazine as an exclusive. Love Triangle confusion ensues among the stars and supporting characters.

Tropes used in The Philadelphia Story include:
Retrieved from "https://allthetropes.org/w/index.php?title=The_Philadelphia_Story&oldid=1833694"
Categories:
Cookies help us deliver our services. By using our services, you agree to our use of cookies.