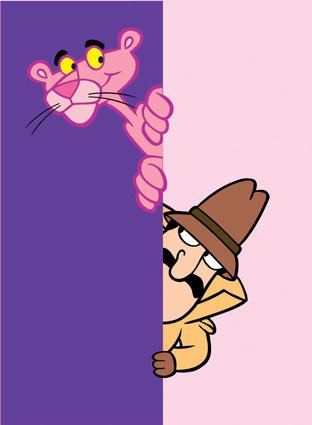 A comedy film franchise that spun off two animated ones. In its original form it totaled nine films over 30 years, most of them directed and co-written by Blake Edwards. A 2006 reboot yielded two additional films.

Peter Sellers died in 1980, but Edwards decided to continue the series and introduce new lead characters. These films are similarly subject to Fanon Discontinuity, particularly due to the circumstances behind the first.

In 2006, the franchise was rebooted under the original title The Pink Panther, with Steve Martin as Clouseau and Jean Reno as a new sidekick, Ponton. Aside from Clouseau, Dreyfus was the only character carried over from the original films (played by Kevin Kline in the first film, and John Cleese in the second). The Pink Panther 2 arrived in 2009, but its disappointing box-office suggests that no further films will be forthcoming.

The Animated Shorts: The first film had animated credits, produced by DePatie-Freleng Enterprises, that featured a "literal" representation of the flaw in the eponymous diamond. This proved so popular with audiences -- indeed, all the films thus have animated credits (during the end credits for Return he even appears alongside the institutionalized Dreyfus as a hallucination), including the reboot -- that the character, an anthropomorphic mute, was spun off into a series of animated shorts the following year. For more information, see Pink Panther (Animation).

Because A Shot in the Dark did not involve the diamond itself, the Panther didn't feature in the credits (from Strikes Again onwards, he does even if the diamond isn't involved) but a caricature of Clouseau did. This went over well enough that a shorter-lived series of shorts focusing on "The Inspector" (voiced by Pat Harrington) and his sidekick Deux-Deux (a gendarme) was made in the mid-1960s. The Clouseau animated character appeared in the credits of all the subsequent films through Trail, always futilely pursuing the Panther. The Replacement Scrappy characters got their own animated equivalents for Curse and Son, and a Martin-styled Clouseau figure appears in the reboot.

Tropes used in The Pink Panther include:
Retrieved from "https://allthetropes.org/w/index.php?title=The_Pink_Panther&oldid=1833698"
Categories:
Cookies help us deliver our services. By using our services, you agree to our use of cookies.