The Place Promised in Our Early Days 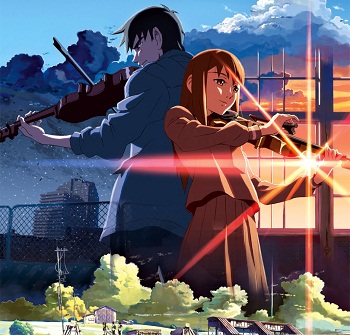 On those now distant days... we made a promise we couldn't keep.

The Place Promised in Our Early Days is Makoto Shinkai's second film, and was released in 2004. It is his first feature length film, which was made possible by his collaboration with a large staff. The story is set in the late 1990s in Japan; during 1974, the nation was divided into two halves, one administered by the United States, and the other by the Union. The Union constructed a massive tower reaching far into the sky in the same year, and the sheer scale of the tower made it visible from Tokyo on a clear day.

As teenagers, Hiroki and Takuya became friends with a girl, Sayuri, and came to know each other better while travelling to and from school on the train. When Hiroki and Takuya find a crashed drone plane, they begin to repair it and promise to take Sayuri to the tower. However, she mysteriously disappears before they can and the boys' lives drift apart.

Three years later, tensions between the UN alliance and the Union grow. Takuya is now working with the Alliance to understand parallel universes, while Hiroki is a student in Tokyo, who suffered increasing melancholy as a result of his numerous dreams about Sayuri. He recieves a letter from her one day, and as the threat of war builds in the divided nation, he discovers that the mystery of Sayuri's disappearance is linked to the fate of the world and resolves to fulfill his promise to her.

The film concerns similar thematic elements to Shinkai's previous work, Voices of a Distant Star, in that both works relate to the consequences of being separated from the individuals that one holds dear.

Tropes used in The Place Promised in Our Early Days include:
Retrieved from "https://allthetropes.org/w/index.php?title=The_Place_Promised_in_Our_Early_Days&oldid=1748827"
Categories: