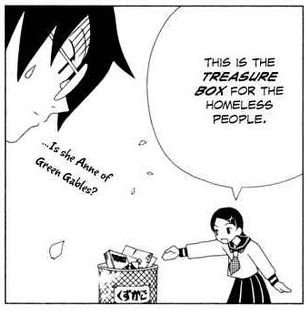 A character, usually but not always female, who undergoes various hardships, losing almost everything she holds dear, and yet seems never to lose her sunny disposition. Think Happy Thoughts may be how she does this.

When this character is played for drama (which usually entails a Break the Cutie situation), you sometimes get the feeling she's conducting some serious repression in order to continue functioning, and we are likely to see her break down; on the other hand, her infinite patience and good humor may give her away as The Messiah. If she's a member of a group that The Hero appeals to for help, count on her being the Least Is First.

When she's played for laughs, the fates the character endures are too horrendous to actually happen in real life, and yet she's too stupid to realize how God-awful her situation is and how miserable she ought to be; it seems as though the whole universe is out to Break the Cutie, and failing. (Although sometimes they just need a Rant-Inducing Slight.)

The Trope Namer is the title character of Eleanor Porter's 1913 novel Pollyanna, who was made famous in the 1960 Walt Disney movie, and was mocked by Alan Moore in the aforementioned throwaway joke in the pages of The League of Extraordinary Gentlemen. However, it was popularized over a century earlier by Dr. Pangloss from the novel (and later Broadway musical) Candide, who is always explaining why getting kidnapped by pirates or sold into slavery is ultimately for the best. Indeed, the adjective Panglossian has been in use since the 1800s.

Shows up a bit less nowadays, given that the current attitude is that a character's intelligence (As well as degree of "Cool"ness) is inversely proportional to their attitude. That is, the more and more negative their attitude, the more intelligent (and cool) the character is; conversely, the happier a character is, the stupider and more unrealistic is their mindset. Partly induced by works like House and Daria. This is probably a Cyclic Trope.

As you can see, often sexist in portrayal, since most of these characters are female. You see the occasional males, but they're often beaten down because men are supposed to be stoic and emotionless.

May be an unstoppable force of goodness and optimism if she's a Princess Classic.

Contrast Stepford Smiler where this trope is just a facade. Knight in Sour Armor for someone with a similar attitude but a lot more snark and pessimism. Polar opposite of The Eeyore and Broken Bird.

May overlap with Angst? What Angst?. Can lead to cases of Tastes Like Diabetes if extreme enough.

Examples of The Pollyanna include:

Retrieved from "https://allthetropes.org/w/index.php?title=The_Pollyanna&oldid=1818920"
Categories:
Cookies help us deliver our services. By using our services, you agree to our use of cookies.