The Power of Legacy 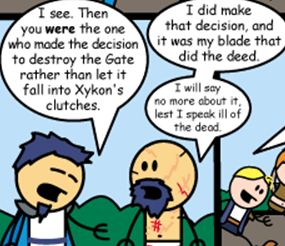 Stretching the truth to avoid shaming a fallen comrade: so morally ambiguous a paladin can do it.

Dominic: So you kept quiet... so mom could remember him as a hero.

She didn't know why she'd been asleep all that time. Should he tell her, and betray that memory, even if it was false? No, of course he shouldn't.
—Will Parry, The Amber Spyglass

The mission is over. The MacGuffin has been acquired, the Big Bad has been defeated, and the Hero is on his way home. Unfortunately, it is a bittersweet victory: Bob was killed during the mission, dying just in time for the Hero to hear his last words. Upon his return, the Hero meets Alice, who was very close to Bob, often a significant other, and must perform a Death Notification. She asks the hero what Bob's last words were. The hero, compassionate guy that he is, takes her hand, looks her in the eyes, and...

The hero has a good reason for doing this, however. At the end of his life, Bob did something that would tarnish his legacy. Maybe his last words were High Octane Nightmare Fuel. Perhaps he did a Face Heel Turn. Whatever the reason, telling Alice the truth would only result in damaging Bob's legacy, as well as hurting Alice by knocking down someone she held as a hero. Even if the hero has never told a lie up to that point, he will find it best to strech the truth so that Bob can be remembered fondly. If this takes place at the end of the story, the hero will get away with it, but if the story goes on after the hero's lie then it will usually come back to bite him in the butt.

Note that this is the same trope whether the character outright lies or delibrately fails to mention the fact that would taint his friend's legacy. Also note, the Power of Legacy is used to defend a character's honor. If they lie/keep silent to shame the person in question, or to just prevent Alice from hearing his last words when they would actually help his legacy, that's being a Jerkass.

Not to be confused with The Power of Friendship or The Power of Love, although they may be the reason that The Power Of Legacy is invoked. See also Treachery Cover-Up

Related to Never Speak Ill of the Dead.

Examples of The Power of Legacy include:

Kirk: "Captain's log, stardate 1313.8. Add to official losses, Dr. Elizabeth Dehner. Be it noted she gave her life in performance of her duty. Lieutenant Commander Gary Mitchell. Same notation." (to Spock) I want his service record to end that way. He didn't ask for what happened to him.

Richard Baxton piloted his Recon Rover into a fungal vortex and held off four waves of mind worms, saving an entire colony. We immediately purchased his identity manifests and repackaged him into the Recon Rover Rick character with a multi-tiered media campaign: televids, touchbooks, holos, psi-tours--the works. People need heroes. They don't need to know how he died clawing his eyes out, screaming for mercy. The real story would just hurt sales, and dampen the spirits of our customers.