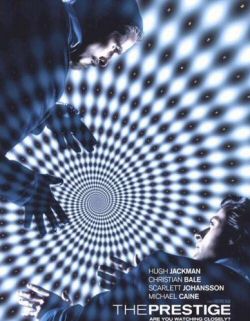 Are you watching closely?

The story follows an escalating rivalry between two magicians, Alfred Borden and Robert Angier. They started their careers as partners until Angier's wife died during a performance, possibly because Borden may have tied a stronger rope knot than necessary (with the wife's permission). The rivalry extends into the magician scene as the two compete to see who is the best at their craft.

Told through the framing devices of the two men reading one anothers' journals, the plot is not shown in chronological order.

Interestingly, the film cannot really be said to have a protagonist. Both sides are portrayed neutrally without either getting a sympathetic point of view. This gives a different slant on a story instead of just the normal protagonist vs. antagonist story. Instead we get a story about two overly obsessed flawed men.

Also, this film has Nikola Tesla played by David Bowie.

This film is built almost entirely out of unexpected twists. You will learn them if you read any further.

Tropes used in The Prestige include:
Retrieved from "https://allthetropes.org/w/index.php?title=The_Prestige&oldid=1900952"
Categories:
Cookies help us deliver our services. By using our services, you agree to our use of cookies.