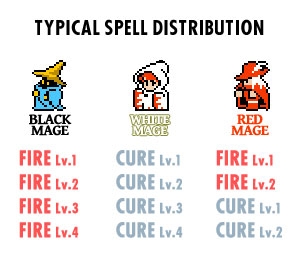 The "player class" family tree is a large, branching kudzu with enough arms to print several dozen sourcebooks. One such branch is The Red Mage, a magician capable of casting spells from two different or even mutually exclusive schools of magic. Much like a magical Jack of All Stats, this cousin to the Magic Knight fuses two otherwise inimical capabilities and gains strength from both... while mastering neither, and perhaps even gaining both their weaknesses!

Theatrics and balance issues aside, the true wonder and claim to fame of the Red Mage is that they are talented, open minded, and have trained in a way that allows them to understand and become able practitioners in two fundamentally different forms of magic. Think about it this way: they are the fantasy equivalent of a Renaissance Man or Omnidisciplinary Scientist, skilled multi-disciplinarians of already complex and taxing fields. While some mages scoff at different forms of magic, the Red Mage takes the time to study them, and by learning them becomes truly versatile.

It's not often a single magic user can pull off a Yin-Yang Bomb, after all.

The most common form of Red Mage combines White Mage and Black Mage with a hint of Glass Cannon / Squishy Wizard. In rare cases, they may also be as physically gifted as a Magic Knight or Combat Medic. However, the Red Mage isn't just a swordsperson who picks one school of magic to go with their blade, but just about any two (and sometimes more) schools of magic. Common pairings include: White Magic and Black Magic, Light and Dark, or Fire and Ice (and occasionally another Elemental Power).

Contrast Crippling Overspecialization. See also Class and Level System and Splat. May suffer (and benefit) doubly from Linear Warriors, Quadratic Wizards. To avoid confusion, the Red Mage may well be a single class with access to spells from different classes, or the result of a magician who has studied in more than one magical tradition. Compare Hybrid Monster and Hybrid Overkill Avoidance.

Examples of The Red Mage include: