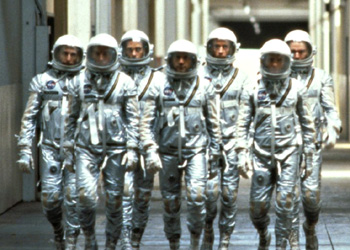 A 1983 adaptation of Tom Wolfe's best-selling book, about the attempt to break the sound barrier and the subsequent Space Race. Briefly considered to be a campaign promo for John Glenn's presidential aspirations in 1984, but it actually didn't help much. It received eight Oscar nominations, including Best Picture, and won four.

Although the movie is centered around the men and their fast, expensive, and dangerous toys, the women in the movie receive a great deal of character development, from Pancho and Nurse Murch to all of the astronaut's wives.

Not to be confused with the Anime online store The Right Stuf, which has one "F". Or the song by New Kids on the Block.

Tropes used in The Right Stuff include:
Retrieved from "https://allthetropes.org/w/index.php?title=The_Right_Stuff&oldid=1597149"
Categories: