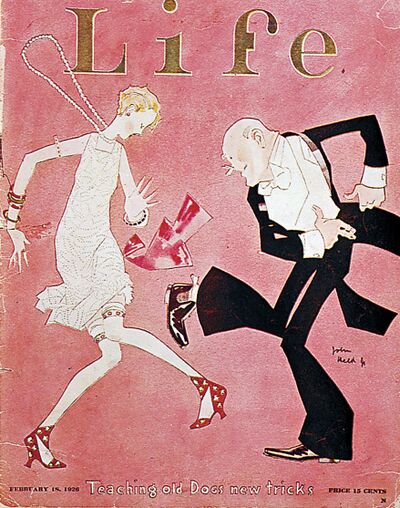 The time of bootleg, flappers, and jazz. And where coffee costs a dime.

The setting of many an Agatha Christie mystery, this is one era that absolutely lives up to the stereotypes and then some. The Great War was over, (most of) the Western world had never been so prosperous - time to par-tay!

Style is almost exclusively Art Deco moderne, all minimalist lines and coolly fluid shapes. (Side point- Art Deco's fascination with streamlining household objects whose actual wind resistance is irrelevant proved popular because levelling incomes led for the first time to a group of people who could afford good design but not household servants. It seems that a streamlined Art Deco lamp is easier to dust than a frilly Victorian one...)

Dresses are short and so is ladies' hair. (Bobbed hair had actually emerged earlier and was popularized during the earlier 20's, while hemlines gradually rose to knee-length by 1925. And despite those costumes you buy these days, above-the-knee hemlines were nonexistent at any time. And contrary to the costumes you buy, not all dresses were tasseled and figure-hugging. Dresses had a boxy and boyish silhouettes, had dropped waists and were minimally or highly decorated depending on the occasion.)

Characters include gangsters and G-men, flappers and their sheiks (sort of proto-Metrosexual young males), languid white movie idols and jolly black jazz singers and dancers, and lots of cheery collegiate types who wear huge fur coats and play ukuleles while shouting "23 skidoo!" The basic idea was to shock, amaze and amuse at all costs; there were apparently some women of the era who would greet their guests in the bath.

The fun and excitement is only heightened by the fact that much of it is totally illegal, at least in the USA. There Prohibition is in full swing, so gin is made in bathtubs, smuggled by the likes of Al Capone and served only in 'speakeasies', hole-in-the-wall bars highly prone to raids by stolid, humourless cops. Unless you're Eliot Ness or one of his Untouchables, be extra cautious to never insult a tough-looking Italian in a sharp suit, or you'll find yourself looking down the barrel of a Tommy Gun.

As for entertainment, silent films starring the likes of Charlie Chaplin, Mary Pickford, and Buster Keaton gained enormous popularity, though the fact that they didn't have sound meant that movies still hadn't killed off Vaudeville or Minstrel Shows just yet. The advent of sound later in the decade finished the job, however. Radio progressed quickly through the last of its experimental phases and was firmly established as a mass-market medium by the end of the decade, while ultra-low-def mechanical television had brief success with early adopters (essentially beta-testing it) before The Great Depression and the advent of (relatively) high-definition all-electronic TV killed it off by the mid-30s.

During all this, of course, the relics of The Gay Nineties, now doughty dowagers and grumpy old Colonels, look on disapprovingly, from short skirts and hair, to make-up and swimming wear.

One should also note that while things were just swell in America, Britain and much of Western Europe (where it was dubbed The Golden Twenties across The Pond), if you were in an area hard hit by World War I (say, Germany, Italy, Russia, Turkey or the entire Caucasus Mountains region before the Soviets annexed it) this was not a fun time. (Even some of the victors, like the Dominion of Newfoundland, were left with mountains of war debt.) However, it doesn't mean that they didn't try, once they were able to pull themselves together again. However, in Germany, there are right-wing paramilitary groups who have some very grand ambitions and there will be a few people who get a chilling feeling that one loudmouth Austrian with a toothbrush mustache is going to be very big trouble.

For example, Soviet Russia (called USSR since 1922), after a devastating civil war, experienced a short period of economic growth thanks to the NEP (new economic policy), a series of reforms that allowed free enterprise and private property. A new Soviet bourgeoisie was born, with a penchant for over-the-top parties and a slavish fascination with American fashion, music and dance. The Soviet Nouveau Riche (typically called a nepman) was a stock character in 20's Russian satire.

Often a nostalgic setting during The Fifties and The Sixties. This period began sometime after World War I and continued to the Crash of October 1929, which led to Bank Runs and ultimately The Great Depression of the Dust Bowl "dirty thirties".

Also see: The Great Depression, The Forties, The Fifties, The Sixties, The Seventies, The Eighties, The Nineties, Turn of the Millennium, and The New Tens for more decade nostalgia.

This ain't baloney, this is Serious Beeswax, as most words and phrases originated from this decade, so here are some examples:

Had an earful, sap? I have to see a man about a dog, so pipe down or I'll bump ya off.

Popular tropes from this time period are:
Examples of The Roaring Twenties include:

Works set in the Twenties

Works made during the 1920s

Retrieved from "https://allthetropes.org/w/index.php?title=The_Roaring_Twenties&oldid=1820809"
Categories:
Cookies help us deliver our services. By using our services, you agree to our use of cookies.