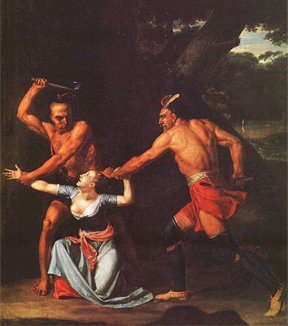 The Native Americans are frequently portrayed in modern fiction as a tragic group of people subject to prejudice of the White Man and now are suffering in an age of darkness. Seems like it is standard fare for Native Americans to be like that?

Though not common today, in older works the default was the Savage Indian, a native of their land who is a bloodthirsty man or woman who only wishes to kill and hunt trophies for the sake of satiating their unquenchable thirst or desire for heads. They are brutal, uncompromising and are all too willing to let allies take the fall. They are most of the time exiled by their tribes for being too violent, but if a foreigner comes in, expect the Savage Indian to reject the outsider first with a weapon up their vital organs. Sometimes they will be the rival tribe/griyo that the Noble Indians want to see defeated or at least no longer hurting them and the people they are making peace with but couldn't due to unfortunate damage done by them.

This trope has ancient forerunners as practically every culture has identified a more primitive neighbor as "savages", particularly when there existed a conflict of interests. It became especially common in the age of imperialism during which blatantly racist ideas were used to advance a policy of European nations "civilizing" the rest of the world. In the United States, expanding settlers repeatedly came into conflict with the native tribes. Infrequent abhorrent acts of violence perpetrated by the natives against the intruders led to the perception that all natives were brutal savages, especially considering that the settlers were all saints. Battles against savage Indians were commonplace in Western fiction up until the modern era, putting this on the edge of becoming a Dead Horse Trope. In the era of the "Revisionist Western," (the era in which we find ourselves) fiction often attempts to provide a more diverse and historically accurate view of violence by and against Native Americans.

Examples of The Savage Indian include:

Retrieved from "https://allthetropes.org/w/index.php?title=The_Savage_Indian&oldid=1523261"
Categories:
Cookies help us deliver our services. By using our services, you agree to our use of cookies.