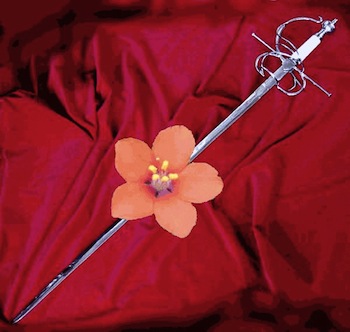 The Scarlet Pimpernel is a classic action-adventure story written by Baroness Emmuska Orczy and turned into a play in 1903-05. This wildly popular tale is set during The French Revolution, an era when screaming, toothless peasant mobs rose up against the poor sympathetic aristocracy and began slaughtering them wholesale. (Madame la Guillotine was a very busy woman at this time.) It seemed there would be no hope for the French Nobs, until a dashing hero arrived on the scene to snatch those destined for death from the hands of the bloodthirsty and fanatical Revolutionary government. This hero was a mysterious masked figure known only as The Scarlet Pimpernel (note: a pimpernel is a small red flower with five petals), and together with his small band of followers, he managed to spirit many a doomed aristocrat safely to England.

But who is this "Scarlet Pimpernel"?

The beautiful expatriate French actress, Marguerite Blakeney, doesn't know, but she's recently discovered that her brother, Armand, is one of his band of followers. Unfortunately, Armand's been revealed to the Revolutionaries, and if Marguerite doesn't help Citizen Chauvelin, the slimy agent of the French Republic, discover the Pimpernel's true identity, Armand will be executed.

To whom can Marguerite turn for help? Certainly not her foppish, empty-headed dandy of a husband, Percy. He barely has the brain cells to choose what outrageous outfit he'll wear to their next social function. He surely couldn't be of any use in finding out who the Pimpernel really is.

Then one day Sir Percy leaves for France, and Marguerite makes a discovery that will turn her world upside down...

The Scarlet Pimpernel is a notable work of Western literature, which would go on to influence popular culture throughout the generations. It's an early precursor to the Spy Drama genre of fiction, and it can also be argued that the Pimpernel himself is a proto-Superhero. It arguably created the modern concept of the Secret Identity. Like Batman, he's a wealthy personage who hides behind a foppish face by day and performs dashing and heroic deeds under the cover of darkness. Like Superman, he hides his intellect and intentions behind a mask of clueless ignorance. He also uses an iconic symbol (the Pimpernel flower) to denote his identity. Truly, modern-day movies and comic books owe a lot to this character. Even Anime seems to have been influenced a bit by him, judging by the number of series (like Trigun and Trinity Blood) which feature seemingly dorky -- yet secretly competent -- heroes... who often wear red.

The Scarlet Pimpernel would go on to spawn a series of sequel books, operettas, musicals, movies, and radio and TV adaptations. The Pink Carnation book series by Lauren Willig features characters who took up where Sir Percy left off (i.e. the Carnation, and prior to that, the Purple Gentian). In 1941 it was even updated and remade as Pimpernel Smith to be about rescuing Jews from Nazi Germany.

Listed by publication order. The chronological order of the series is a bit more complex.

This story has also been the subject of many a parody:

The original novel provides examples of:

Orczy's sequels provide examples of:
Retrieved from "https://allthetropes.org/w/index.php?title=The_Scarlet_Pimpernel_(novel)&oldid=1769330"
Categories:
Cookies help us deliver our services. By using our services, you agree to our use of cookies.