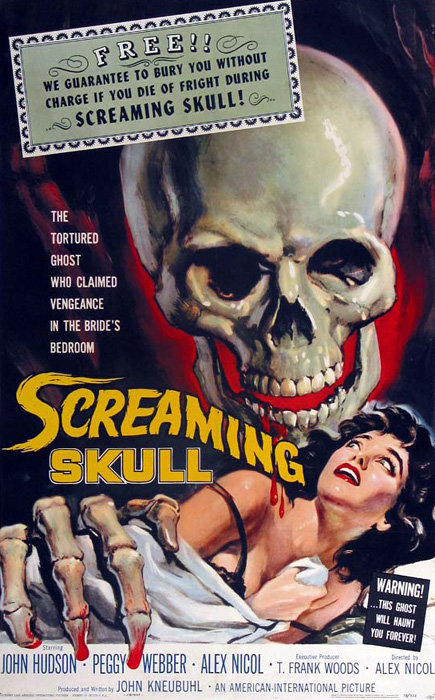 Meet a lovely couple of newlyweds, Eric and Jenni. Eric is a widower who inherited his last wife Marian's palatial country home after she died in an unfortunate and mysterious accident. Jenni is a wealthy young nervous wreck fresh out of an asylum. Oh, and there's also Mickey the gardener, he of unkempt hair and a child's mentality, who claims that Marian "cries in the night" and dislikes Jenni as an unwanted replacement. Now they're all going to spend a few days in a huge, empty mansion echoing with the ghosts of the past, with nothing to hide their emotional baggage. What Could Possibly Go Wrong??

Screaming Skulls, that's what. Jenni starts to hear unexplained screeches at night, and stumbles upon skulls that disappear by the time she brings someone else to see them. Is the ghost of Marian hanging around to drive Jenni away? Is this all Mickey's doing, who underneath his mildly retarded exterior hides the shrewd mind of a psychological torturer? Does Jenni need to go back to the asylum? Or hmmm, maybe Eric is once again trying to off his spouse in an effort to get at her fortune?

Actually, though it's transparently obvious that Eric is the Big Bad, he's not the only one playing with skulls. His attempts to drive Jenni to suicide (or at least create a condition in which her ending up hanging from the ceiling won't be questioned too much) go well until Mickey swipes the skull Eric's been leaving for Jenni to find and exposes him for the murderer that he is. At the film's climax, when Eric goes looking for his missing skull, Marian's ghost really does show up, and a veritable pack of semi-translucent skulls hound Eric across the estate before one attaches itself to his neck and brings him down in a pond, drowning him.

This 1958 American horror film directed by Alex Nicol, a cross between Alfred Hitchcock's Rebecca and George Cukor's Gaslight, would be a mere footnote were it not for its appearance (along with the Gumby short Robot Rumpus) in episode #912 of Mystery Science Theater 3000.

Tropes used in The Screaming Skull include:
Retrieved from "https://allthetropes.org/w/index.php?title=The_Screaming_Skull&oldid=1643971"
Categories: