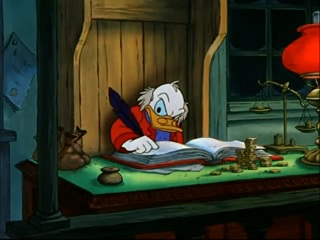 Traditionally, misers are portrayed in media as grasping, penny-pinching people who live in squalor and who never spend money despite being quite wealthy. Some are businessmen, some are loan sharks, moneylenders and Morally Bankrupt Bankers, some are pawnbrokers, some are lawyers... but regardless of how they made their money, The Scrooge is sitting on a pile of it. But getting him to spend it is... problematic to say the least.

In real life, many rich people became rich in the first place by saving their money and spending only the minimum they needed to, and by only putting their money where it was guaranteed to make them more. Not all wealthy people in real life are like this, but it is worth noting that this is where the image of stereotypical misers came from. It is also worth noting that some of history's biggest misers started out wealthy.

In previous eras, it was common to portray pretty much all Jewish characters like this. The Scottish were traditionally subject to this stereotype as well. And in Germany, it's the Swabian people.

Not to be confused with The Grinch, even though the namer for this trope also hated Christmas.

Examples of The Scrooge include: