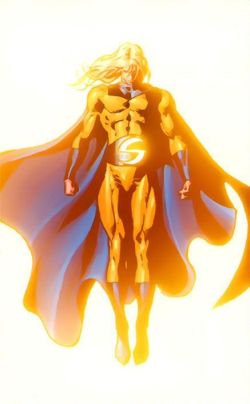 First seen in The Sentry #1 (September, 2000), Robert Reynolds was an overweight, middle aged, alcoholic until one day he awakens and realizes that he is the Sentry, a superhero with the power of one million exploding suns, whom must once again take the mantle of the hero to fight his archnemesis the Void, who he fears is returning soon.

This rather strange origin story begun via a hoax that was perpetuated by Stan Lee himself in stating that there was a golden age superhero whom he just forgot about and wanted to weave into the continuity. Through a series of recursive flashbacks Robert Reynolds is seen fighting alongside Marvel's most popular superheroes including the Fantastic Four, the Hulk, and Spider-Man, and the entirety of the Sentry's first miniseries revolves around figuring out why everyone has Laser-Guided Amnesia surrounding his existence.

His actual powers were bestowed upon him when a young Robert, while working in a physics lab, drank a serum that "moved his molecules 1 second ahead of the current timeline." It was later revealed that this was a newer version of the Super Soldier serum that transformed Captain America. It was also revealed that Robert drank the serum to get high...higher than a million suns

Seen as somewhat of an Alternate Company Equivalent of Superman due to his seemingly limitless powers, including: energy blasts, super strength, flight, and of course a hefty dose of New Powers as the Plot Demands.

The Sentry while seeming like an Invincible Hero actually has many weaknesses due to his being Ax Crazy (this is not expunged when Robert becomes the Sentry). Robert Reynolds is an agoraphobic, anxiety-ridden schizophrenic who relies on his robot sidekick CLOC to calculate the severity of problems that need his help, and solves them in order based on CLOC's input.

These mental problems culminate in the big reveal that Robert Reynolds is actually the Void, and the Sentry persona is but a guilt-born creation to counterbalance the evil that Reynolds commits; however, this origin story is constantly called into question throughout the Sentry's run.

In terms of Video Games, The Sentry was a playable character in Marvel Ultimate Alliance 2 for Nintendo DS and Marvel Super Hero Squad Online.

The Sentry provides examples of the following tropes:
]
Retrieved from "https://allthetropes.org/w/index.php?title=The_Sentry&oldid=1846548"
Categories:
Cookies help us deliver our services. By using our services, you agree to our use of cookies.