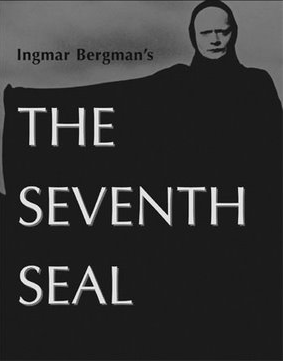 Jöns: "Who will take care of that child? Is it the angels or God or Satan... Or just emptiness? Emptiness, Sire..."
Block: "It can't be so!"

The Seventh Seal (Det sjunde inseglet) is a classic film from Swedish director Ingmar Bergman. The film is highly symbolic and explores many philosophical and existential concepts, including death and the meaning of life.

It has moved beyond the realm of the classic, to the point that it is often used as a punchline about stuck-up film majors, critics, and film studies teachers. However, it was never intended to be high art, and is rather straightforward, humorous and melodramatic despite its dark theme.

When Antonius Block, a disillusioned crusader and his squire Jöns return from the Holy Land, they find little solace. Even far from the battlefields, Death still stalks him patiently.

When Death arrives, Block challenges him to a game of chess, to which Death agrees. If Block wins, he goes free, but Death's Anthropomorphic Personification seems undaunted. He is the Trope Namers of Chess with Death, after all.

Block and Jöns travel through a Crapsack World of cults, the black plague, and ravaged countryside, with Death on their tail all the while. Jöns saves a mute girl from a Fate Worse Than Death at the hands of a roving bandit. She cowers from him, expecting the same, and he sets himself somewhere between Magnificent Bastard and Complete Monster by sighing that the Crusades have made him tired of rape.

She accompanies Jöns as a servant and soon they find themselves at a church, where Block goes to the Confessional. Unfortunately, Death is standing in for the priest, and Block inadvertently reveals his chess strategy. Block discovers the trick and vows that he will still beat Death, though he is clearly shaken.

Block, Jöns, and the mute girl meet up with a family of traveling actors, in a rare moment of beauty, peace, and simple joy. Bloch invites them to accompany him as he returns to his castle, where they may all be safe from the encroaching plague.

They arrive at a small town where a mob is burning a witch. Jöns idly considers killing them for their ignorance, but in the end decides it would make no difference. He then embarks on a diatribe over The Nothing After Death, explaining the film's Leitmotif, just in case we failed to put it together ourselves.

However, Block is unwilling to let Jöns strip away his hopes. Despite this, Block loses his match with Death, but is granted one final reprieve so that he may return to his wife for a last meal.

Death arrives and Block tries again to beg him off to no avail. The family of actors sees Death leading the others off in a disturbing Danse Macabre, but Block's kindness to them has spared them from the plague.

Tropes used in The Seventh Seal include:

Jonas: No. My performance!
Death: Cancelled... because of Death.