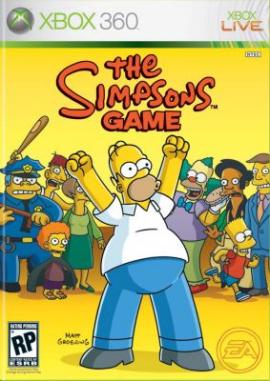 The Simpsons Game is a platformer based on The Simpsons. It's also an Affectionate Parody of loads and loads of other games, and lampshades just about every Trope they can think to lampshade.

Each character has their own special powers: Homer can become a giant belly and smash into things; Bart becomes Bartman, and is able to glide and shoot with his slingshot; Lisa can harness the power of the Buddha and stun enemies with her saxophone; and Marge can rally up supporters and is able to send Maggie into small gaps.

During the game, Bart finds the manual to The Simpsons Game, from which the family discovers their superpowers. Soon afterwards, there is an Alien Invasion. After that, the family is sucked into their computer and starts playing through levels based on other video games. Finally, they attack the fortress of the creator, Matt Groening, and ultimately make a stairway to heaven in order to battle William Shakespeare, Benjamin Franklin, and God.

Notable that it came out a few months after The Simpsons Movie was released, although they aren't connected beyond both being The Simpsons [Media]. Also gets points for having both the writers and the original voice cast brought on to help with its development.

Tropes used in The Simpsons Game include:
Retrieved from "https://allthetropes.org/w/index.php?title=The_Simpsons_Game&oldid=1778209"
Categories:
Cookies help us deliver our services. By using our services, you agree to our use of cookies.