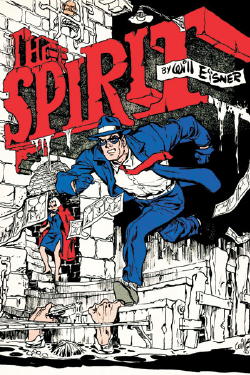 This page is for the comic series. For the 2008 film, see The Spirit.

When confronting escaped criminal Dr. Cobra, criminologist and private investigator Denny Colt is caught in the evil scientist's experimental liquid and put into a death-like coma. Believed dead by his friend Commissioner Dolan, head of the Central City Police Department, Colt is buried the next day, only to rise from his grave the next night very much alive. After catching Dr. Cobra, Denny Colt decides to remain dead and take up the job of being The Spirit, so he can go after criminals and crimes beyond the reach of the police.

The Spirit, which premiered in June 1940 and ran continuously until October 1952, was the brainchild of Will Eisner, arguably one of the most important men in the history of comic books. Originally, it was created and distributed as a weekly insert for more conventional newspapers, rather than as a traditional comic. These stories have been reprinted by many publishers in numerous comic book and graphic novel series.

Eisner's intent was to have a series that focused on characters and storytelling, rather than to create a "super-hero comic book". In fact, the mask and gloves that are The Spirit's trademarks were a concession to his publishing partner, who didn't think the series would sell without having a bona fide "masked hero". One of the effects of this is that often The Spirit is a guest in his own series, sometimes only appearing at the very beginning and very ending of the story.

In addition to comics, the character appeared from 1941 through 1944 in a conventional Newspaper Comic strip, in a 1987 TV Pilot (which did not produce a series) and, as of December 25, 2008, a theatrical release movie written and directed by Frank Miller.

The Spirit does not have any super-powers nor does he have any special training. He is an excellent fighter, and survives mostly on force of will and luck. In fact, the strip is fairly realistic in that there are very few instances of extra-normal powers. People get hit and they bleed. People get shot and they die. (There are, however, over the course of over 500 stories, a few appearances of witches, a couple of aliens, one man who can fly and, when appropriate, Santa.)

The Spirit was licensed to DC Comics between 2007 and 2011. The 2007 series was written and drawn by Darwyn Cooke, who distilled elements of the previous series, and set it in the modern day. DC Comics later rebooted the series to fit into their First Wave DCU universe; the 2010-2011 series was written by Mark Evanier and Sergio Aragones, having taken over for Darwyn Cooke, and was set around the 1940s or 1950s.

We currently have a Character Sheet under construction.

Tropes used in The Spirit include:
Retrieved from "https://allthetropes.org/w/index.php?title=The_Spirit&oldid=1782237"
Categories: