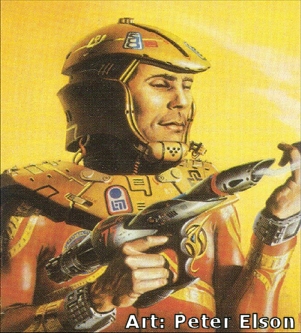 Breaking the rules, and loving it!

A Space Opera of a different color by Harry Harrison.

A long time ago, there was a planet called "Dirt" (or something like that). It was there that humanity had its start, and from there they spread out, developing a large number of planets with diverse civilizations and forms of government. With enough wealth, you can enjoy a wealth of luxurious accomodations on various vacation planets. Then again, someday you might find yourself held at gunpoint while the government confiscates your ship and goodies and trucks you off to a short life of back-breaking labor for the good of the local planetary empire. But, hey, you should have read the tourist guide before you landed.

Many people never get as far as space, of course. Many people spend their entire lives planetside, enjoying the kind of cheerfully dull life you could find in hundreds of towns and cities on Real Life Earth at this very moment. Only it's a little more peaceful than that, because, as it turns out, they've managed to stamp out crime.

People no longer open their newspapers to read about murders and bank robberies and various missing persons. See, the government has gotten so good at spotting pre-criminals that they can whisk the kids away early for a little corrective programming, ensuring the safety and continued boredom of the general populace.

James "Slippery Jim" diGriz is one of the few who ever slipped below the radar. He was bored enough to take to crime and smart enough to go uncaught, and he's been pulling off heist after heist as he hones his skills and pads his nest. It's amusing to watch the reaction of the local cops, who don't have enough practice in this sort of thing to be effective. Jim feels pretty good, as he rationalizes to himself that he's really not hurting anyone. (Technically true; he strictly deals in white collar crime; he's robbing corporations, banks, the government and insurance companies, but he never commits any crime of violence. So while he's not hurting any individuals, breaking into a government warehouse at night and looting it is still a crime.)

Actually, follow his logic far enough and you realize that in the future world, where the population of all of Dirt is just a drop in the bucket compared to the population of the civilized galaxies, he might be right. So he robs a bank, takes a hundred billion credits or so. The bank loses nothing; the insurance policy kicks in. The insurance company loses nothing; they spread the loss out amongst their trillions upon trillions of customers by raising their rates. The customers, in point of fact, don't lose so much as two cents each, because the sheer number of customers makes the rate increase less than a penny per head. Besides which, Jim provides entertainment for the masses, who get to read about his exploits, and jobs for the police officers, who sorely need the practice. Win-win-win-win-win.

That is, until a heist goes wrong, and Jim finally gets caught. Not by the police - nor by intergalactic law enforcement. He gets caught by the Special Corps, an organization that uses criminals to catch criminals (headed by Harold Peters Inskipp--a/k/a "Inskipp the Uncatchable", formerly the greatest criminal in the galaxy until he was tapped to become the Special Corps commander). See, Jim is a Technical Pacifist who sincerely believes that it's wrong to kill people (non-lethal violence is fine), including bad guys and people who might be trying to kill him. This puts him head and shoulders above the kind of villains that this organization deals with, who are perfectly willing to kill people, sometimes en masse. And, well, if you need to deal with a mass-murdering supervillain and the local police force isn't even equipped to handle a simple bank robbery, who better to forcibly recruit than the less dangerous sort of criminal?

Jim, who isn't fond of the alternative (and who doesn't like a good lobotomy?), decides to accept the offer, and thus becomes one of the operatives, given various assignments to track down and neutralize dangerous criminals at various locations across the galaxy. His first assignment is to neutralize a Femme Fatale serial killer who later becomes his wife and gives him twin baby boys. Oh, and also, he's about as infuriating to his boss as, well, any rather unconventional main character has ever been to Da Chief.

Tropes used in The Stainless Steel Rat include:
Retrieved from "https://allthetropes.org/w/index.php?title=The_Stainless_Steel_Rat&oldid=1557896"
Categories:
Cookies help us deliver our services. By using our services, you agree to our use of cookies.