Everything About Fiction You Never Wanted to Know.
Jump to navigation Jump to search
/wiki/The Stoogescreator 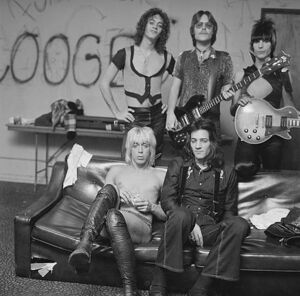 "I am the world's forgotten boy


The one who searches to destroy"
—The Stooges, "Search and Destroy"

The Stooges were a proto-punk band from Ann Arbor, Michigan, active between 1967-1974, who along with their fellow Michiganders MC5 proved to be enormously influential on the development of Punk Rock.

The band's lineup was as follows:

The band's Signature Style was aggressive, incredibly simple proto-punk based around Ron Asheton and later James Williamson's heavy, hypnotic riffs, Scott Asheton's tribal rhythms and Iggy Pop's awesomeness. One of the original Crazy Awesome frontmen of rock, Pop was famous for his extreme behaviour during live concerts, which included rolling around in broken glass, smearing himself with peanut butter, performing without a shirt, inventing crowd-surfing and baiting and verbally abusing the audience.

The Stooges, much like their fellow protopunkers the MC5, only released three albums during their initial career. Their first two albums were The Stooges and Fun House. These didn't sell well but attracted a cult audience and were later Vindicated by History, recognised as classic protopunk albums. The group temporarily collapsed in 1971 after being dropped from their record label and suffering from severe heroin abuse, but were quickly rallied by David Bowie, who got them a new contract and produced their final album Raw Power. Bowie's mix was frequently the source of controversy as he was brought in to salvage the album after a botched, amateurish mix by Iggy. The band barely lasted another year before breaking up for good. Iggy went on to a solo career and remained friends with Bowie ever since.

Iggy was personally responsible for the controversial to say the least 1997 remaster of Raw Power, which is always cited as the worst possible example of the Loudness War. He also reunited the band in 2003, thankfully stayed away from the remasters of their other two albums and recorded a new Stooges album, The Weirdness. Fan reaction has largely been... mixed, with frequent invoking of Fanon Discontinuity.

Discography:
The Stooges provides examples of the following tropes: