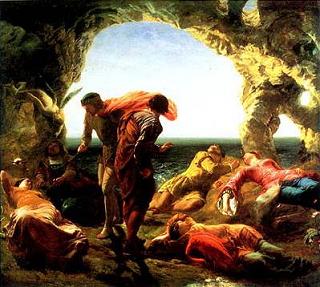 A scene -- after one hard party enchantments

The Tempest is one of William Shakespeare's "problem plays" (neither comedy or tragedy), also called "romances." The play centers around Prospero, the former Duke of Milan who was usurped by his brother, Antonio, and sent out to sea with just his books and his daughter, Miranda. Twelve years later, Prospero is ruling over a seemingly deserted island, with two of the island's only other beings at his command: Ariel, an air spirit (who's grateful to Prospero for rescuing him from being trapped in a tree, but would like to be freed from his service soon), and Caliban, the deformed son of a witch (who hates his master, and makes no secret of it).

When Antonio, along with a group that includes the King of Naples and his son, Ferdinand, sails by the island, Prospero has Ariel create a storm (the emponymous tempest) to shipwreck them onto the island, so that Prospero may have his revenge. The story ends happily, though, with Prospero forgiving those that wronged him, Ferdinand and Miranda falling in love and getting married, and Ariel getting his hard-earned freedom.

This play remains one of Shakespeare's finest, even to this day, and was once theorized as the final play he wrote by himself. It inspired the science fiction classics Brave New World, Forbidden Planet and Prospero's Books, and The Decemberists song The Island, and the characters appear again in Prospero's Daughter and A Midsummer Tempest. Contrary to popular belief, though, it was not the Bard's final work, but its reputation is sealed. It is a rare example of a play in which Shakespeare appears to have come up with an original plot (another is The Merry Wives of Windsor).

There are roughly twenty-one filmed and televised versions of this play. Some play it straight, some update to modern times, and others such as Prospero's Books are massively wild re-interpretations.

Tropes used in The Tempest include:
Retrieved from "https://allthetropes.org/w/index.php?title=The_Tempest&oldid=1520809"
Categories:
Cookies help us deliver our services. By using our services, you agree to our use of cookies.