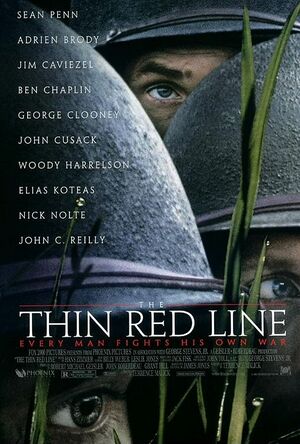 "Every man fights his own war."

The Thin Red Line is a war book about the battle of Guadalcanal by author James Jones. It is a philosophical work about the internal and external battles the various soldiers go through. In 1998, it was made into a movie by legendary reclusive auteur filmmaker Terence Malick, whose films specialize in deep philosophizing, sumptuous nature photography, and internal dialogue by multiple characters. Malick used the film to expound on the idea that "all men have got the same soul" and are part of nature, therefore warfare is just an example of mankind fighting against himself.

The film features Loads and Loads of Characters (still more in the book) who each have their own perspectives on the battle raging around them, although most of the characters seem to be surprisingly thoughtful and articulate in their internal monologues, despite (or perhaps because) the ever present threat of impending death.

The film is also notable for being pitted against Saving Private Ryan both at the time it came out and ever since, with the two (very different) war films being (perhaps unfairly) compared to each other and various film critics taking sides. This is owing to the fact that it depends on what kind of war movie you are looking to see.

Both movies are visceral, but Saving Private Ryan would probably be described as "action packed" and expounding the attitude that "war is hell, but sometimes necessary and we will never understand what the Greatest Generation went through." (It could even be said to have popularized this nostalgic approach to WWII.) Whereas The Thin Red Line would probably be described as "philosophical" and immersive, expounding the philosophy that men don't really know why they fight because they are part of nature, and make excuses for their violent nature.

See also From Here to Eternity, also by James Jones.

Tropes used in The Thin Red Line include:

This great evil, where does it come from?
How'd it steal into the world?
What seed, what root did it grow from?
Who's doin' this? Who's killin' us, robbing us of life and light?
Mockin' us with the sight of what we might've known.
Does our ruin benefit the earth?
Does it help the grass to grow, the sun to shine?
Is this darkness in you, too?
Have you passed to this night?

"(The producers) gained the director's confidence by "catering to his every whim," providing him with obscure research material, including a book titled Reptiles and Amphibians of Australia, an audiotape of Kodo: Heartbeat Drummers of Japan, information on the Navajo code talkers... making his travel plans and helping the director and his wife Michele get a mortgage."

"Malick's Guadalcanal would be a Paradise Lost, an Eden, raped by the green poison, as Terry used to call it, of war. Much of the violence was to be portrayed indirectly. A soldier is shot, but rather than showing a Spielbergian bloody face we see a tree explode, the shredded vegetation, and a gorgeous bird with a broken wing flying out of a tree."

A unit is like a family. Every family has a father, that's me. Sergeant Welsh here is the mother.

Why did they have to die and I'm still here? Huh!? I can stand right here, and not-- one-- bullet!

Welsh: The world's blowing itself to hell just about as fast as we can arrange it. Only one thing a man can do - find something that's his, and make an island for himself.
Welsh: Still believing in the beautiful light? I wish I knew how you did that. Because me, I can't feel nothing.
later: Where's your spark now? (cries over Witt's grave at the end)

Staros: We had a man, gut shot out, on the slope, sir. It created quite an upset.
Tall: Fine! Fine! Now what about those reinforcements!
Staros: My company alone cannot take that position, sir.
Tall: You're not going to take your men into the jungle to avoid a god damned fight.
Now do you hear me, Staros! I want you to attack. I want you to attack right now with every man at your disposal. Now attack, Staros!
Tall: (later) It's never necessary to tell me that you think I'm right. We'll just... assume it.
Staros: We need some water... the men are passing out.
Tall: The only time you should start worrying about a soldier is when they stop bitchin'.

Tall (while following General Quintard around): Shut up in a tomb. Can't lift the lid. Played a role I never conceived. What I might have given for love's sake... too late.