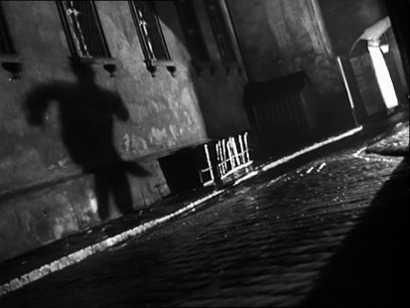 Down-on-his-luck American writer Holly Martins (Cotten) arrives in postwar Vienna to meet with an old friend, Harry Lime (Welles), who has offered him a job. Unfortunately, the day Martins arrives, he finds out that Lime is dead.

Martins becomes entangled in a web of stories that make his pulp Westerns seem quaint in comparison. Investigating the death of his friend in order to clear his name from the selling of stolen and diluted penicillin he meets Lime's former love interest, a seemingly crooked cop, and a porter who has seen far too much. Martin's quest to clear the name of his friend drags him into dangerous territory and challenges his preconceived notions of good and evil.

The story takes many of the tropes commonly associated with Film Noir and plays with them. The film is also notorious for Orson Welles stealing the show in the final act, and for its hypnotic music score by zitherist Anton Karas (whose title theme became a huge hit).

Tropes used in The Third Man include:
Retrieved from "https://allthetropes.org/w/index.php?title=The_Third_Man&oldid=1922011"
Categories:
Cookies help us deliver our services. By using our services, you agree to our use of cookies.