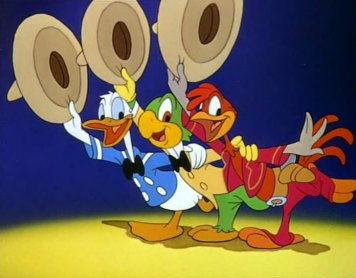 That's Jose Carioca in the middle, Panchito Pistoles to the right, and some low-key, unknown individual to the left.

The film is an Animated Anthology, although the segments aren't as divided as they are in Saludos Amigos, and flow together with one plot line of Donald having received gifts for his birthday:

The Trio would later appear in two stories written by Don Rosa, a few episodes of The House of Mouse and a dark ride at Epcot's Mexico Pavilion. A Third Latin American film that would have introduced a fourth, Cuban Caballero was planned, but never released.

Not to be confused with ¡Three Amigos!

Tropes used in The Three Caballeros include:
Retrieved from "https://allthetropes.org/w/index.php?title=The_Three_Caballeros&oldid=1931839"
Categories:
Cookies help us deliver our services. By using our services, you agree to our use of cookies.