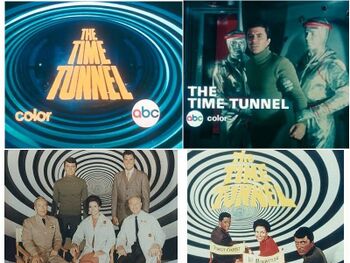 "Two American scientists are lost in the swirling maze of past and future ages during the first experiments on America's greatest and most secret project, the Time Tunnel. Tony Newman and Doug Phillips now tumble helplessly toward a new fantastic adventure somewhere along the infinite corridors of time."
—Opening Narration

Irwin Allen, the man behind Lost in Space and Voyage to the Bottom of the Sea, also gave us this Sci-Fi series. The premise? Two Sixties guys who don't care beans about temporal causality travel through time, encountering a lot of Stock Footage and never quite grasping that You Can't Fight Fate. Meanwhile in the Future, their contemporaries watch and try to decide when things are going badly enough for our heroes that it wouldn't hurt to just send them off to yet another random date.

Tropes used in The Time Tunnel include:
Retrieved from "https://allthetropes.org/w/index.php?title=The_Time_Tunnel&oldid=1504536"
Categories: