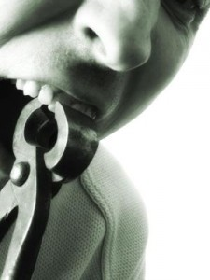 Just like with eyes, fingers, toes and testicles, teeth are an extremely sensitive part of us that we can't bear to see get broken or pulled out, whether our own or other people's. Just like with fingers, we have so many of them, giving us so many ways to feel the pain (even worse if a Depraved Dentist is involved). However, someone may pull a tooth for a good reason, i.e., it gives them so much pain.

Keep in mind that this is about teeth getting hurt or removed in ways other than getting knocked out in a fight. There already exists a separate trope for that.

Examples of The Tooth Hurts include:

Retrieved from "https://allthetropes.org/w/index.php?title=The_Tooth_Hurts&oldid=1889194"
Categories:
Cookies help us deliver our services. By using our services, you agree to our use of cookies.