The Unicorn in the Garden 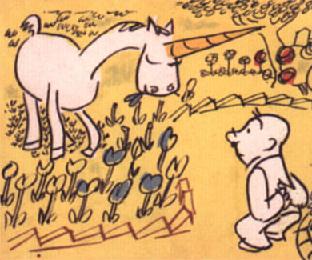 "I'm absolutely certain you're going to need a strait-jacket."

"The Unicorn in the Garden" is a 1953 animated short directed by William T. Hurtz, produced by UPA, and released through Columbia Pictures. The short is based directly on James Thurber's short story of the same name, originally published in The New Yorker magazine on October 21, 1939, and later collected in Fables For Our Time and Famous Poems Illustrated (1940). The short closely imitates the style of the author's own illustrations and cartoons. Like many of Thurber's fictions, "The Unicorn in the Garden" deals with the fundamental conflict between men and women, and the romantic vs. practical mindset represented by each, respectively.

This short occupies the 48th place on the list of The 50 Greatest Cartoons.