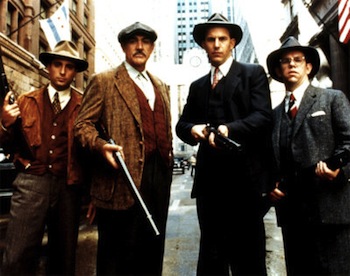 A live action television series aired between 1959 and 1963 based on the exploits of (Real Life) 1920s Chicago Prohibition agent Eliot Ness and his group of loyal agents, nicknamed "The Untouchables" because of their refusal to be bribed by the Mob as many others were at the time. Most notable for pursuing bootleggers and gangster Al Capone (and eventually arresting him--on tax evasion charges!) Later adapted as a movie in 1987, directed by Brian De Palma and written by David Mamet. It starred Kevin Costner, Sean Connery and Robert De Niro. The film itself inspired a second television series in 1993, with Tom Amandes.

Retrieved from "https://allthetropes.org/w/index.php?title=The_Untouchables&oldid=1869353"
Categories:
Cookies help us deliver our services. By using our services, you agree to our use of cookies.