The Wake of Magellan 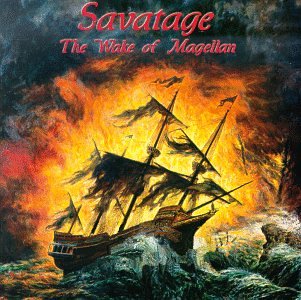 The Wake of Magellan is a 1998 album by Savatage, the third of three Rock Operas, and the final album with Zack Stevens as lead vocals. The story is inspired by two real world events; the murder of Veronica Guerin and the Maersk Dubai event.

An old Spanish sailor, Hector Del-Fuego Magellan, is spending his retirement days in solitude after returning to his hometown. He's a lonely man as he's outlived his closest friends and his life at sea prevented him from starting a family, which he now regrets. He wanders the beach as an old eccentric, claiming to be descended from the famous Magellan, carrying an old heirloom hourglass, and talking with the ocean as he reflects on his past and wonders if there is any real future to look forward to.

He makes one daily stop on his beachcombing walks. He watches an older woman, who was once beautiful in their youth, drink a glass of wine at a cafe. She had been an aspiring actress who left to follow her career and like him returned home to dwell on her life. He tries to work up the courage to speak with her but never can.

The more he thinks about it, the more he fears the future. The only thing that realistically waits for him is a lonely end in an uncaring state hospital. He owns a sailboat and has a better idea than waiting to die: he can set sail for the last time and let his beloved sea claim him. The ocean disagrees with his plan but can only convince him to wait rather than abandon his suicide voyage.

Magellan finds a young man asleep under a pier, but when the tide fails to wake him he realizes the man is actually dead. Around him are packets of "Blackjack Guillotine", the brand of heroin he overdosed on. Magellan can't understand why he would throw his life away and the ocean shares that his friends got him hooked at eighteen. As Magellan tries to cover the body with his jacket a funeral wreath for Veronica Guerin washes up beside them. Magellan asks who the woman is and why the ocean would steal from her, the response is that she was an Irish reporter killed trying to expose drug dealing gangsters, and being dead she wouldn't mind.

Magellan says a prayer and continues down the beach, distraught at how much the world has changed for the worse, and eventually breaks down crying. A passing child tries to speak to him, wanting to see the hourglass but his mother drags him away. As they leave the beach the child sees Magellan drop the hourglass, the top popping off and spilling the sand, climb into his boat and set sail into the evening. He has no place in the world anymore and decides to take his final journey.

Magellan falls asleep and dreams of his famous ancestor who tells him to return to land. When he awakens he finds himself in a massive storm. He believes the ocean is granting his wish until he realizes that he hears a human voice. In a flash of lightning he sees the impossible: a man struggling in the waves in the middle of nowhere. Magellan mans the tiller and sails to his rescue, battling the storm yet unable to reach the castaway. All the while he begs God to forget his prayer for death and let him see the morning, or at least give him every possible moment he can cling to life. Finally he finds himself blown beside the man, drags him onboard, and sets course for the land as the storm subsides.

On the journey home, the castaway explains his misfortune. He had been a stowaway on a freighter and the ship's officers threw him overboard. Magellan is horrified as even in ancient, often crueler, times a man would never be left to die in such a manner. He would see justice for the crime but the castaway begs him not to turn to the authorities as he is now an illegal alien. Magellan agrees and arranges a favor for the man, dropping him off at a dock where a friendly captain allows the man to accompany him to America.

Magellan returns to the beach that he left to die. His hourglass is waiting for him, repaired and refilled. He pushes his boat out to sea and walks up the beach towards the cafe, the ocean saying farewell as it erases his footprints in the tide.

Tropes used in The Wake of Magellan include:
Retrieved from "https://allthetropes.org/w/index.php?title=The_Wake_of_Magellan&oldid=1558851"
Categories: