Everything About Fiction You Never Wanted to Know.
(Redirected from The War On Straw)
Jump to navigation Jump to search 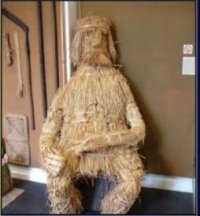 Your argument did not address his, but nice try.

So, you want to bring up politics, or have An Aesop, but can't bring yourself to fairly represent the other side of the argument? You Did Not Do the Research about the other side's position, and hope to patch your argument with a little dodgy logic?

Well, there's only one thing to do! Declare War On Straw!

You too can fight against positions that would make an outside observer say What an Idiot!! Just don't fight anything that has any resemblance to reality, and you should win easily!

Some of the tropes here are not strawman every time they appear; for instance, a Corrupt Church, Animal Wrongs Group, or Amoral Attorney can sometimes be used as a villain a la Acceptable Targets without any (deliberate) intention of making a larger political statement. Sometimes people use those things with the justification that they do exist in reality to a limited extent -- but they are still strawmen when used, implicitly or explicitly, to try to make a larger argument against anyone who shares their beliefs.

Sometimes the existence of non-corrupt/wrong/amoral versions is acknowledged in the setting to indicate that there's no hard feelings; on the other hand, sometimes those good versions are really a Fox News Liberal used to try to make an actual strawman less obvious.

It is also important to note that caricature, itself, can be a perfectly valid way to make an argument; Voltaire, Swift, and many other writers have used it effectively and incisively against their opponents. The distinction is that valid caricatures use exaggeration and hyperbole as rhetorical devices to present nonetheless legitimate arguments, exposing the victim's failings and flaws without misrepresenting them. But the line between the two can be extremely thin, especially in unskilled hands or when the author does not truly understand what they are trying to caricature; many authors have produced strawmen that were painfully obvious to others while believing themselves to be penning biting Swiftian satire.

For more detail about the fallacy upon which this series of tropes is named, see Strawman Fallacy.

The flip side (where the target is so wacky it's hard to parody) is Poe's Law.

When the War on Straw is being lost, it's Straw Man Has a Point.

Pages in category "The War On Straw"

The following 63 pages are in this category, out of 63 total.

Media in category "The War On Straw"

Retrieved from "https://allthetropes.org/w/index.php?title=Category:The_War_On_Straw&oldid=1849113"
Categories:
Cookies help us deliver our services. By using our services, you agree to our use of cookies.