The World Is Always Doomed 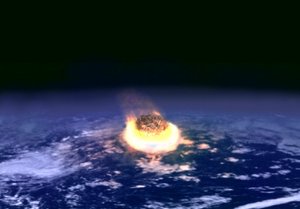 Another day, another world ending disaster.

"There's always an alien battle cruiser, or a Korlian Death Ray, or an intergalactic plague that's about to wipe out life on this miserable little planet. The only way these people get on with their happy lives is they do. Not. Know about it!"
—Agent K, Men in Black

One day, the world is threatened with a meteor the size of Sicily. The next day, some Mad Scientist's "ultimate weapon" will destroy the entire planet. The day after that, the entire universe will implode because the Cosmic Keystone slipped off its pedestal...

Some series use a threat to bring about The End of the World as We Know It as a common plot device. The problem is, the drama or shock value wears off pretty quickly once it's been done more than once.

While it may be true that bigger threats can make for more exciting stories, there's only so many times we can hear "All of Earth is doomed!" before the Shocking Swerve ceases to shock anymore. This trope is pretty much endemic to Monster of the Week series. Story-Boarding the Apocalypse might help restore some of the impact by reminding the viewer what will happen if the heroes don't pull off this week's victory.

The only way that something like this is really believable is if the world really is always doomed, as in a Cosmic Horror Story setting where rather than defeating one menace after another that seems to randomly choose this very moment to come out of nowhere, it's all the heroes can do to merely provide an impediment against the progress of the same catastrophes that are continually attempting to worm their way past and wreak havoc.

When threats of impending doom are always being predicted but mysteriously fail to happen, then you may wish to refer to the Apocalypse Day Planner.

Examples of The World Is Always Doomed include:

Wedge: After every major victory, I hope the fighting is over, but it'll never be over. Even after we defeat the Imperials, there will be someone... another threat to peace...

Angel: I helped save the world, you know.
Spike: Like I haven't.
Angel: Yeah, but I've done it a lot more.
Spike: Oh, please.
Angel: I closed the Hellmouth.
Spike: I've done that.
Angel: Yeah, you wore a necklace. You know, I helped kill the Mayor and, uh, and Jasmine...
Spike: Do those really count as saving the world?
Angel: I stopped Acathla. That saved the world.
Spike: Buffy ran you through with a sword!
Angel: Yeah, but I made her do it. (Spike gives him a disbelieving look) I signaled her with my eyes.
Spike: She killed you. I helped her! That one counts as mine.

Maj. Carter: Sir, if there are still a small enough number of replicators on board, a properly equipped team could possibly...
Col. O'Neill: [sarcastically] Save the world?
Maj. Carter: Getting old for you, sir?

"I am just a small part of what once was known as "Venom". Pieces of me are scattered throughout the cosmos. Eventually, another will become sentient and exact retribution. You will never escape the shadow of fear. My hatred for your kind...is eternal."

Mr. Incredible: No matter how many times you save the world, it always manages to get back in jeopardy again. Sometimes I just want it to stay saved! You know, for a little bit? I feel like the maid; 'I just cleaned up this mess! Can we keep it clean for... for ten minutes!?"

Max: What's going on here?
Virgil: Oh merely the end of the world!
Max: Oh good. I was afraid it was something serious.

Superman: You came after all. What changed your mind?
Fate: It was because you went back. You reminded me that it's not just the forces of evil that never give up.