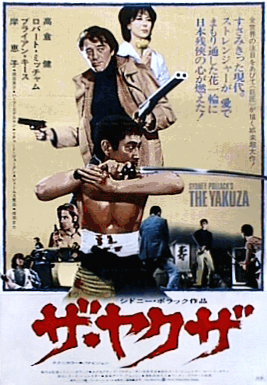 The Yakuza is a 1974 film directed by Sydney Pollack. (Retired) detective Harry Kilmer (Robert Mitchum) goes to Japan to help out an old friend, George Tanner (Brian Keith), who had been dealing with the Yakuza. The Yakuza had kidnapped his daughter and her boyfriend to coerce Tanner into a business deal.

Harry and Tanner's friendship goes back to World War II, when they served together as Marines in Japan. While in Japan, Harry had fallen in love with a local woman, Eiko, and helped save her sick daughter. Eiko's brother Ken was disgraced by his sister's relationship with a former enemy soldier and he disappeared into the yakuza underworld. However, since Ken owes a lifelong debt (called giri in the movie) to Harry, he reluctantly joins them to help rescue Tanner's daughter.

They successfully rescue the hostages, but in doing so they anger the yakuza and contracts on Ken and Harry's lives are issued. Harry refuses to abandon Ken and his family while their lives are in danger, defending them from yakuza attackers, but he eventually learns how much pain his presence in their lives has caused them. Despite this, Ken and Harry overcome their differences, helped by Harry's openness to Japanese tradition.

The film emphasizes Japanese tradition and honor among the yakuza, and remarkably has two Yubitsume scenes.

The film was written by Paul Schrader and his brother Leonard. Paul would notably go on to write Taxi Driver. Rewrites were also undertaken by Robert Towne, who wrote Chinatown.

See Yakuza for the page describing the yakuza.

Tropes used in The Yakuza include:
Retrieved from "https://allthetropes.org/w/index.php?title=The_Yakuza&oldid=1612802"
Categories: