Everything About Fiction You Never Wanted to Know.
Jump to navigation Jump to search
/wiki/The Yardbirdscreator 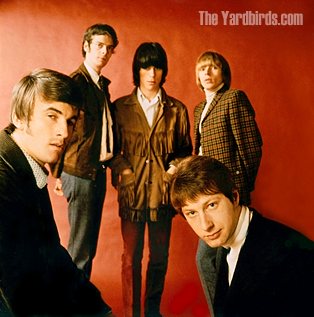 A British Invasion band active in the 1960s British blues scene alongside The Animals, The Small Faces and The Rolling Stones. The Yardbirds are best known for their hard-edged Blues Rock sound, which influenced future Hard Rock and early Heavy Metal performers and for serving as the starting point for several guitar players who became famous in their own right; Eric Clapton, Jeff Beck and Jimmy Page.

The original line-up was Clapton (lead guitar, backing vocal), Paul Samwell-Smith (bass guitar, backing vocal), Chris Dreja (rhythm guitar, bass guitar after Samwell-Smith departed), Jim McCarty (drums) and Keith Relf (lead vocal, harmonica). Clapton left to join John Mayall and the Bluesbreakers shortly before the completion of the group's second album, which he felt was too much of a departure from their blues roots, and was replaced by Jeff Beck, who lead the group in a distinctly psychedelic direction. For a very brief period, Jimmy Page joined the band and played co-lead guitars with Beck. While there are few recordings of the two playing together, this configuration turned out to be highly influential.

Finally, Jeff Beck left and Jimmy Page effectively took over as the leader of the group, which promptly split up. Undaunted, Page decided to organize The New Yardbirds, putting a whole new group together to fulfill an obligation to play at several European tour dates. Page and company decided to record an album after the completion of the tour. Chris Dreja issued a cease and desist order that stated Page could only use the name for those tour dates. Inspired by a snarky comment from Keith Moon (that the band would go over like a lead balloon), the group changed their name to Led Zeppelin.

In The Nineties, Chris Dreja and Jim McCarty reformed the Yardbirds with several new musicians. (Indeed, Dreja and McCarty have been the only stable members of any version of the group.) So far, this edition of the band has released one studio album and one live album.

Discography:
The Yardbirds provides examples of the following tropes:
Retrieved from "https://allthetropes.org/w/index.php?title=The_Yardbirds&oldid=1524071"
Categories: