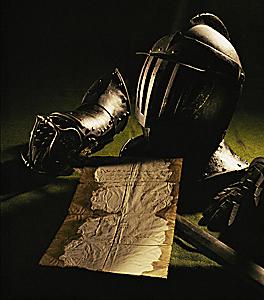 Wallenstein's order to Pappenheim to intervene in the battle of Lützen, where both he and Gustav Adolf were killed. The order is stained with Pappenheim's blood.

Massive European war raging from 1618 to 1648 (although the French continued fighting the Spanish for a bit longer) involving, directly or indirectly, just about every European power in some fashion. It is usually considered to be the longest recorded continuous war (The Hundred Years' War had a couple of interruptions), and was, until the Taiping Rebellion, the bloodiest war in recorded human history. It was mainly (though not exclusively) fought in the Holy Roman Empire. It famously started with the Defenestration of Prague, the throwing out of two imperial officials from a window (they were unharmed; depending on which side's propaganda you believed, this was either due to divine intervention or their landing in a pile of a substance polite historians call "equine stool", childish ones "horsie poo", and brutally honest ones "horse manure" or "horseshit"). It Got Worse.

The origins of the war are complex, and considering the numerous participants arguably unique to each one of them. The basic conflict involved tensions between Protestants and Catholics inside the Holy Roman Empire, tensions between the emperor and his princes (Protestant and Catholic), tensions between the Czechs and the Germans within The Empire, the old French-Habsburg rivalry, Danish-Swedish rivalry, the Spanish conflict with the Dutch, and Swedish designs on the Baltic. All of these things flowed together to create a 30-year long clusterfuck. The three decades of war are considered to be very important because of the military, social and economic development that it accelerated: Armies in this period became much larger than they had been during the Middle Ages, and new tactics were tried out that would eventually become important.

The war itself was one of the bloodiest and most destructive in human history, killing around 1/3 of the population of the Holy Roman Empire. The unprecedented level of destruction stemmed from the fact that it was the first major gunpowder war, the first war that involved all of Europe, and that the war was fought entirely by mercenary armies. Mercenaries were used so exclusively because gunpowder had made the old knight-based model of warfare obsolete, and nobody had figured out the modern model of professional armies yet. Missing a payment would mean your armies switched over to your enemy. The solders themselves were conscripted. An army would come to town and say, "every man here joins us or we hang you". The ones who joined had to loot farms and towns in order to survive since armies march on their stomachs. Often an entire town had to pool their gold, and bribe the invading army to go away (of course sometimes they'd just take to money and loot anyway). It didn't matter whose side the army was on, to the common peasant, they were the enemy, as a farmer who found an army spending the winter on his lands would find he didn't have enough to feed his family. There were also large groups of civilians (mostly women and children) that were kidnapped from looted towns, and forced to live as servants and prostitutes for the army. Many children were born in the army and never knew anything else when the war ended decades later. Many mercenaries would just desert the army and strike it out on their own as "Freebooters" which more often then not was just a nicer way of saying bandits and highwaymen, thus furthering the plight of the common peasant just trying to live their lives. Add to that the religious dimension of the conflict. A particularly fanatical lord would often decide he didn't like that his neighboring lord was Catholic, or Protestant, or the wrong kind of Protestant, and order his mercenaries to go and genocide his neighbor's peasants even if the majority of said peasants were the same religion as him. Sadly, that's just scratching the surface. Unsurprisingly, many of the greatest works of art depicting the horrors of war have their origin in this nightmare of a conflict, most famously The Miseries and Misfortunes of War By Jacques Callot.

Infamously, the latter half of the war largely degraded into the various participants continuing to fight because they could not afford to stop: It was simply cheaper to keep paying your armies by looting the enemy's lands than paying the severance package. This was eventually solved by having The Emperor pay.

The war once and for all broke any pretense of the Holy Roman Empire being a unified state, cemented France as the dominant power in Europe, and propelled Sweden to the status of short-lived great power. It also made boots fashionable. It concluded with the Peace of Westphalia, two treaties (in Münster and Osnabrück) that involved the Spanish accepting Dutch independence, a blanket pardon for any crimes committed in the war, and some territorial changes; it's sometimes called the "Peace of Exhaustion". The key point, though, was the acceptance that a ruler could choose the religion of his state (the so-called cuius regio, eius religio principle); but those who followed other Christian denominations (Calvinism was covered in this for the first time) could so with some restrictions. This pretty much wrapped up the religious wars of Europe.

The war itself had extremely long-lasting effects, the most notable of which was the Westphalian theory of sovereignty, which is to say the idea that a state has territory, population, a government, and that foreigners do not (directly) interfere in its affairs, leading directly to the modern concept of the nation-state. Indeed, this last point is the real meaning of cuius regio, eius religio: while religious affairs were in themselves important, they also served as a stand-in for the more general displeasure of the German princes at the constant interference of the Emperor and of rulers across Europe at the constant interference of The Pope (it's no coincidence that the Pope tends to drop out of European history textbooks sometime in the 17th century). The Westphalian system continued unchallenged among Western powers until the 20th century, when a few theoreticians attempted to make modifications in response to the atrocities of World War II and the nasty business after The Great Politics Mess-Up (particularly The Yugoslav Wars). Nevertheless, the modern system of states is more or less Westphalian, and several states (particularly China and to a lesser extent Russia) still insist on it.

One of the things that makes the war so maddeningly complicated is that participants had a tendency to go off and fight separate wars whenever they got tired of the main conflict, such as the Danish-Swedish war of 1643-1645.

The back end of the war is largely concurrent with the beginning of the English Civil War, which had similarly wide-ranging long-term effects (for entirely unrelated reasons).

Those wishing to explore this time period more thoroughly in a comprehensive and understandable manner might want to check out C. V. Wedgwood's The Thirty Years' War, if it's still in print and/or a library where you live.