This Is for Emphasis, Bitch 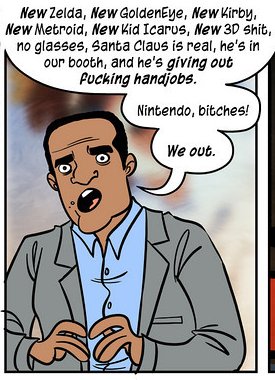 Because a "megaton announcement" just isn't "megaton" enough without this.

Buffy: What are you doing here? Five words or less.
Spike: (Counting them off on his fingers) Out. For. A. Walk. (realises he still has the thumb) Bitch.

It's basically ending a sentence with a comma and "Bitch!", as a way of someone verbally making an exclamation point in dialog.

It did get overused, so now it's a Discredited Trope. You're as likely as not to see it thrown in a sentence just to be funny, even though there is no other reason to emphasize a point this way.

This can overlap with Quote Swear Unquote, Obligatory Swearing.

Compare (but would not overlap with) Verbal Tic, Precision F-Strike.

Examples of This Is for Emphasis, Bitch include:

Ike: "You'll get no sympathy from me. I'm the only pretty-boy in this game... BITCH!"

Nancy: Hurts doesn't it? You're in my world now, bitch.

Happy: (thinking he's just won the fight) The price is wrong, bitch!
Bob Barker: (after laying Happy out with a swift kick to the face) Now you've had enough... bitch.

Donnie: Then why don't you start taking the goddamn pills, (pause) bitch?
Donnie's mom: Our son just called me a bitch.
Donnie's dad: You're not a bitch. You're bitchin'... but you are not a bitch.

"This is my own private domicile and I will not be harassed... BITCH!"

Simon: It's an inaccurate fact, I did some research. There are now almost 10 million bicycles in Beijing... bitch.

"By the way, if you ever have a job where you have to give speeches in front of people, pepper in the phrase 'suck it.' Very empowering. Just be like 'As you can see from our powerpoint presentation suck it...' And your clients would be like, 'Did he say suck it? I like this guy... he's a go-getter.'"

Miranda - "You'll die for that, bitch!"
Jack - "Touch me and I will smear the walls with you, bitch!"

Commander Shepard: That was for Thane/Miranda/Kirrahe/Thane and Miranda you son of a bitch.

Paulie: "Oh yeah, look out! Pooper coming through! Please keep your hands inside the porter potty while you TAKE A DRINK, BITCH!"

Trejo -"You shoulda listened when you had the chance, bitch!"
Created Character: "You just got owned, bitch!"

Howard: I've composed a haiku, in honor of this moment.
Kreese: Alright, drop it down.
Howard: Ninja rise from floor.
Red spray-paint ceiling and walls.
Jack is triumphant.
Kreese: 5, 7, 5, bitches.

Marcus: (after stabbing Myrrah with Dom's knife) You feel that? That's from Dom...and everyone else you killed you bitch!

Homer You can't do this!
Will Wright: Sure I can. I'm Will Wright, bitch!

Garrosh: What difference is there between you and the Lich King now?
Sylvanas: Isn't it obvious, Warchief? *flippant salute* I serve the Horde.
Garrosh: Watch your clever mouth, bitch.

Vulcan Raven: Then return from whence you came, and do not trouble this world again. Bitch.

slowbeef: I-- maybe it was, like, how to get a refund... Like, "Don't be afraid to take back your pumpkins."
Diabetus: This is an example of a defective product. Here's what you should do in this situation, bitch.

"You call that a Salchow?! It looks like you have mad Salchow disease! That's right, your skating has a spongiform encephalopathy, bitch!"