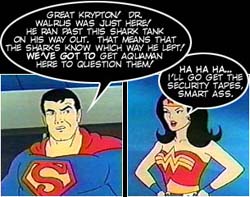 Boy, isn't that guy's power useless. Take Aquaman, for instance. But wait...the villain's lair has an underwater base! That's cool, Aquaman might have a chance of winning. And what, his death trap dumps the hero into a pool of sharks? No problem, with his mighty powers Aquaman can easily overcome this convenient obstacle. And it turns out his doomsday machine is powered by telepathically controllable sea plankton or Psycho Electric Eels...

Basically, a situation where a hero's relatively useless abilities turn out to be phenomenally useful because everything's contrived specifically in order to make them useful, even though realistically there's no reason to expect everything to be so convenient. May be used regularly or as a one-off as part of A Day in the Limelight.

Contrast Plot Tailored to the Party, where the same contrivance is used to make the members of a team seem equally useful, rather than to make a hero look powerful on his own. Benevolent Architecture overlaps with either this or Eigen Plot.

If the character constantly uses a power to solve all his problems, but it generally makes sense (if you have a big sword, and fight monsters, it's not exactly contrived that a lot of monsters can be hurt by a big sword), see When All You Have Is a Hammer.

The exact opposite of this would be Kryptonite Is Everywhere. Compare Heart Is an Awesome Power, when the power turns out to be useful in not just one, but many situations. Compare/Contrast What Kind of Lame Power Is Heart, Anyway?

Examples of This Looks Like a Job For Aquaman include:

Retrieved from "https://allthetropes.org/w/index.php?title=This_Looks_Like_a_Job_For_Aquaman&oldid=1740519"
Categories:
Cookies help us deliver our services. By using our services, you agree to our use of cookies.