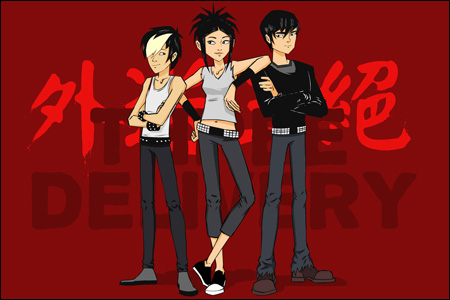 Three Delivery (2008) is an animated series appearing on Nicktoons Network, and produced as a joint collaboration with Animation Collective and FatKat Studios.

It centers on the staff of the Chinese restaurant Wu's Garden: Calvin Wu, his mother Mei Hua (who is mostly referred to as Nana), Calvin's son Barney, and the three delivery kids Sue, Sid and Tobey, who have more to do than deliver takeout around Chinatown. Years ago, Kong Li unleashed the powers of a magical cookbook. The pages -- which contain magical recipes -- were scattered all over Chinatown. A spell was placed on the area by Mei Hua to keep the worst effects confined to Chinatown and to protect the rest of the world. Nana and the Three Delivery trio are in a race to get the magical recipe pages before Kong Li does, and endangers the world.

The title of the show is a clever pun on the facts that the trio delivers takeout to Muggles and magic cookbook pages to Nana, and that their cook, Barney, is overly excited about the fact that Wu's Restaurant has free delivery.

Tropes used in Three Delivery include:
Retrieved from "https://allthetropes.org/w/index.php?title=Three_Delivery&oldid=1749547"
Categories: