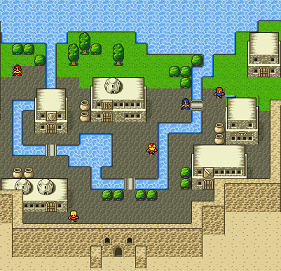 Neighborhood just hasn't been the same since they opened that Weapon-Mart.

Due to The Law of Conservation of Detail, towns and cities in RPGs rarely have an observable population measuring more than a single digit (or, at most, the 'teens); this is far smaller than any realistic level of basic economic sustainability.

The average small country town may have a population of a dozen or so people — a big city, like the capital of a continent-spanning empire, may have as many as thirty. Generally, these towns consist of fewer than ten distinct buildings, all of particular interest to the players; no sign of an agricultural economy or professional tradesmen is outwardly visible. Similarly, approximately 90% of a city's observable population will interact with the player in some way relevant to the plot of the game.

A typical town the heroes find themselves in usually consists of the following; a Trauma Inn, a weapons/armor shop (the true metropolis may have a separate shop for each), an "item" shop, a specialty shop relating to the game's magic system, and no more than three houses. With the exception of those NPCs living in those houses, the entire remainder of the population is apparently homeless; some NPCs seem to exist for the sole purpose of standing in a specific location and talking to passers-by.

In the earliest computer and console RPGs, this was a matter of economy; every kilobyte was precious and couldn't be wasted on extraneous houses or people. The tradition has continued into the modern day for several reasons, with The Law of Conservation of Detail being paramount among them. It does make it more feasible to Talk to Everyone. Especially with Random Encounters, one aversion to this is that there's often More Criminals Than Targets… Who love to Gang Up on the Human. It's often an Acceptable Break From Reality because, really, as large as towns would be in real life, think of how long it'd take to render it, and how much space it'd take on your drive. Ouch.

Some games Hand Wave this by implying the town is much larger via expansive background images; our heroes, for whatever reason, are only visiting a small portion of it. Modern games tend to slightly avert this by adding numbers of non-interactable pedestrians into city scenes, giving the illusion of a larger populace.

Related to Space Compression. See Ghost Town for towns that are actually abandoned.

Examples of Thriving Ghost Town include:

Retrieved from "https://allthetropes.org/w/index.php?title=Thriving_Ghost_Town&oldid=1835337"
Categories:
Cookies help us deliver our services. By using our services, you agree to our use of cookies.