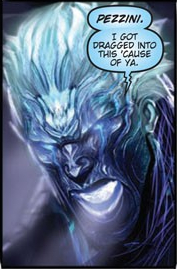 Now I'm a walking fridge!... 'least my beer will always be cold.

Whenever a character becomes powerful enough, they will demonstrate Power Glows with a Battle Aura that can range anywhere from nightlight to supernova. Other characters aren't quite so flashy, instead of turning into a human candle, they become more akin to a human lampshade as light pours out of every orifice,[1] as if they had a (potentially literal) inner fire.

Their eyes will glow, their mouth will light up as if they were about to breathe fire... or ice! Characters with a Throat Light can have it be related to just about any elemental power, or due to being a machine, ghost, or some other strangeness. As with most Psychoactive Powers, the lights will blaze strongly when angry, low when sad, and flicker when near death.

This can be really intimidating since it tends to be scathing hot/cold.

Contrast with Epileptic Flashing Lights. If taken up to eleven, may become an Energy Being.

Examples of Throat Light include: