Everything About Fiction You Never Wanted to Know.
(Redirected from Thundercats (1985 series))
Jump to navigation Jump to search 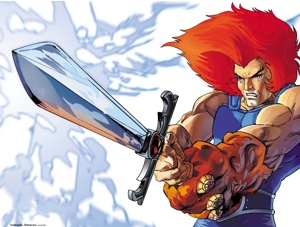 This Animated Show from Rankin/Bass Productions was one of the most popular Merchandise-Driven cartoons of The Eighties.

Somewhere in the depths of space, a group of aliens with feline-patterned skin/80s glam rock stars with a cat-like theme flee their doomed homeworld of Thundera. Pursued by their enemies, the Mutants, their ship crash-lands on the planet of Third Earth.

The series chronicled the Thundercats as they adapted to their new home, making allies and enemies with the natives, and battling the machinations of the series' Big Bad, a mummified sorcerer named Mumm-Ra who usually cowed the Mutants into doing his bidding. The show's second season chronicled their return to Thundera and their attempts to re-stabilize it, with an expansion of the cast of other refugee Thunderans.

The 2011 reboot of the same name can be found here.

Tropes used in ThunderCats (1985 series) include:
Retrieved from "https://allthetropes.org/w/index.php?title=ThunderCats_(1985_series)&oldid=1903687"
Categories:
Cookies help us deliver our services. By using our services, you agree to our use of cookies.