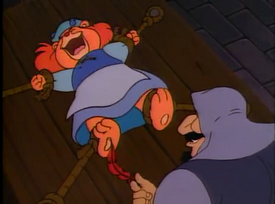 So, we have a Card-Carrying Villain who is going to inflict a horrible torture on his victims. Cutting off fingers won't work in a G-Rated show, what can be a substitute for that? Of course, tickling! Sometimes lampshaded. Basically, tickling is a G-Rated Cold-Blooded Torture. It's usually led up to by the torturer saying "We Have Ways of Making You Talk".

Usually done with a feather (despite not being the most effective in Real Life) and/or tickle robot. May be played as Romanticized Abuse.

See also Cool and Unusual Punishment and Spank the Cutie.

Can lead to Fridge Horror since, Lighter and Softer depiction aside, it is still a form of torture (and there are cases of people dying of laughter).

Examples of Tickle Torture include:

Retrieved from "https://allthetropes.org/w/index.php?title=Tickle_Torture&oldid=1872255"
Categories:
Cookies help us deliver our services. By using our services, you agree to our use of cookies.